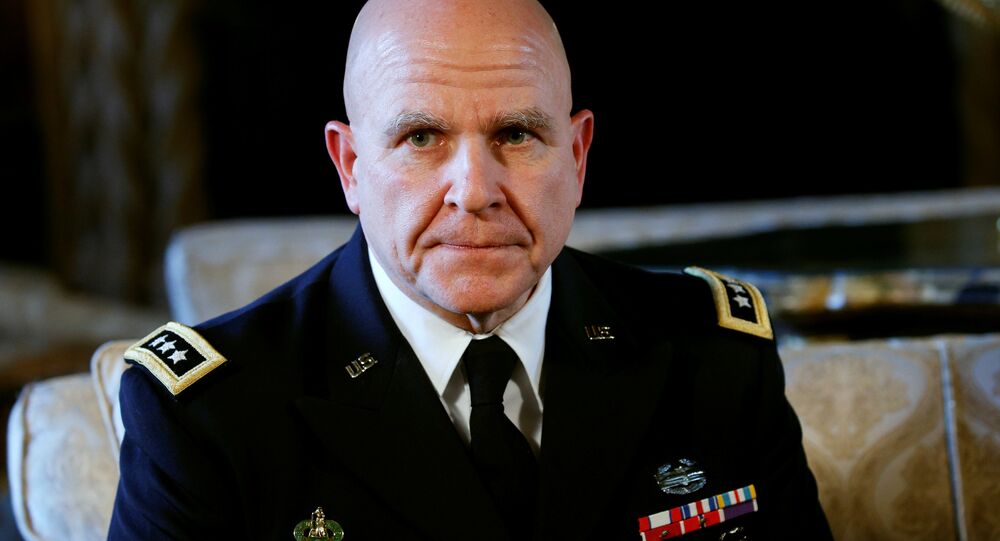 Commenting on the recent appointment of US Army Lt. Gen. Herbert Raymond McMaster as the next US president's national security adviser after the resignation of Lt. Gen. Michael Flynn, RIA Novosti political analyst Alexander Khrolenko provides his reasons why it should be viewed as a "worrying signal to Russia and the world."

"How useful for the US Herbert McMaster will be in the role of the national security adviser remains to be seen. However his reputation of a commander has already been engraved in stone," Khrolenko writes in his article for RIA Novosti.

He calls the appointment of McMaster, whom the US media describes as "the US Army’s leading warrior-intellectual," a "worrying signal to Russia and the world."

Khrolenko points to an article written by Politico's national security correspondent Bryan Bender on the "secret US army study that targets Moscow," which at the time was overseen by Army Lt. Gen. McMaster.

"Lieutenant General H.R. McMaster has a shaved head and a gung-ho manner that only add to his reputation as the US Army’s leading warrior-intellectual, one who often quotes famed Prussian general and military theorist Carl Von Clausewitz. A decade ago, McMaster fought a pitched battle inside the Pentagon for a new concept of warfare to address the threat from Islamist terrorists and insurgents in Afghanistan, Iraq and other trouble spots. Now, his new mission is more focused. Target: Moscow," Bender wrote for Politico back in April.

It was McMaster, the author noted, who was the first to tell the Senate Armed Services Committee that "it is clear that while our Army was engaged in Afghanistan and Iraq, Russia studied US capabilities and vulnerabilities and embarked on an ambitious and largely successful modernization effort."

McMaster, the author said, was not just simply critical of his colleagues, but put together a manual on the Ukrainian war theater entitled Russia New Generation Warfare Study.

© Sputnik / Grigoriy Sisoev
Russian Lawmaker Calls US National Security Adviser McMaster ‘100% Threat’ to Russia
"The high-level but low-profile effort is intended to ignite a wholesale rethinking — and possibly even a redesign — of the Army in the event it has to confront the Russians in Eastern Europe," he further said.

"It is expected to have a profound impact on what the US Army will look like in the coming years, the types of equipment it buys and how its units train," he suggested.

McMaster, as head of the Army Capabilities Integration Center at Fort Eustis, Virginia therefore "is responsible for figuring out what the Army should look like in 2025 and beyond."

His effort is expected to become "the most dramatic rethinking since the collapse of the Soviet Union."

"These are the kind of issues the US Army hasn’t worked since the end of the Cold War 25 years ago," the author quotes retired General Wesley Clark, who served as NATO commander from 1997 to 2000, as saying.

While addressing the Senate Armed Services Committee, McMaster then said that "Russia possesses a variety of rocket, missile and cannon artillery systems that outrange and are more lethal than US Army artillery systems and munitions."

Bender also noted that US military and intelligence officials worry that "Moscow now has the advantage in key areas. Lighter armored vehicles like those the Army relied on heavily in Iraq and Afghanistan are highly vulnerable to its new weapons. And main battle tanks like Russia’s T-90 —thought to be an anachronism in recent conflicts — are still decisive."

As well as about "the combination of unmanned aerial systems and offensive cyber and advanced electronic warfare capabilities," which "depict a high degree of technological sophistication.”

"Eloquent comparison," Khrolenko says, taken that Russia and US had never met as adversaries on a battlefield.

"Those in Pentagon now think that Russia's efforts on modernization of its nuclear forces and the conflicts in eastern Ukraine and in Syria will lead to serious changes in the US ground troops. And the new US president's national security adviser is able to seriously boost the militarization of US," RIA Novosti correspondent says.

In his analysis of the new US national security adviser, Khrolenko also refers to the article of Defense One on McMaster's Russia New Generation Warfare Study.

© Photo : Russian Defense Ministry
Ex-CIA Officer: Trump Security Adviser Wants to Deter Russia
"Speaking recently at the Center for Strategic and International Studies in Washington, D.C., McMaster said that the two-year-old conflict [in eastern Ukraine] had revealed that the Russians have superior artillery firepower, better combat vehicles, and have learned sophisticated use of UAVs for tactical effect. Should US forces find themselves in a land war with Russia, he said, they would be in for a rude, cold awakening," the outlet quotes him as saying.

“We spend a long time talking about winning long-range missile duels,” said McMaster. But long-range missiles only get you through the front door. The question then becomes what will you do when you get there.

“Look at the enemy countermeasures,” he said, noting Russia’s use of nominally semi-professional forces who are capable of “dispersion, concealment, intermingling with civilian populations…the ability to disrupt our network strike capability, precision navigation and timing capabilities.” All of that means “you’re probably going to have a close fight… Increasingly, close combat overmatch is an area we’ve neglected, because we’ve taken it for granted.”

Commenting on the above remarks, Khrolenko therefore notes that "Ukrainian realities bring McMaster back to military concepts and anti-guerilla strategies on a qualitatively new level, a level of foreign policy decisions." The Aim of such decisions will be direct and indirect containment of Russia without drawing the US into the Third World War.

"If we extrapolate the longstanding experience of the new US national security advisor and his views on the US' foreign policy, we could foretell high probability of new military conflicts in various parts of the planet in the nearest future. I also suggest that the new Pentagon's chief, James Mattis will be eager to support hybrid concepts and military solutions of his co-thinker," he finally stated.