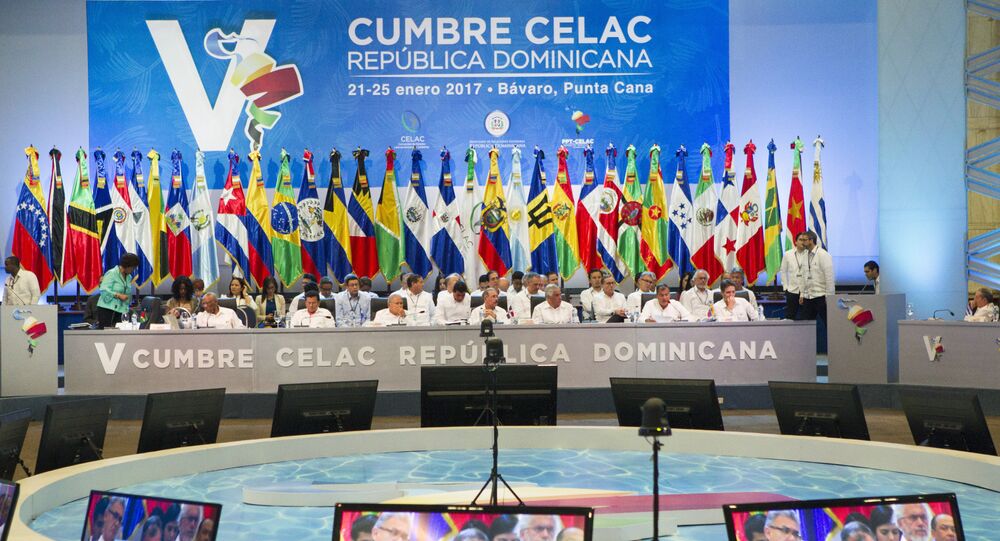 Latin America Could Turn to Russia, China in Wake of Trade Split With US

The governments of some Latin American countries have signaled that they are ready to "break their dependence" on the United States; Russia and China could play a key role in the region, Venezuelan political analyst Ernesto Wong told Sputnik Mundo.

© AP Photo / Ahmed Omar
US Exit From TPP May Bring Latin America Closer to China
In an interview with Sputnik Mundo, Venezuelan political analyst Ernesto Wong said that in Latin America, there are several factors which have given rise to the hope that this year will see a number of key political changes in the region.

One of these factors is the willingness of some regional governments to "break their dependence" on the United States and allow Russia and China to play a key role in the region, according to Wong.

"Latin America is at odds with Washington but it is developing friendly ties with China and Russia, which is why in 2017 the region is expected to overcome the imperialist dependence on the US and to establish more favorable conditions for exchange… trade and investment with Russia and China," Wong said.

As for China, Wong referred to the January 20 meeting between Beijing and the Community of Latin American and Caribbean States (CELAC), which he said opened up new prospects for the exchange of public and private capital.

"It's important that none of the countries of the Pacific Alliance decided to break off relations with China, which means that they are  interested in continuing trade ties with Beijing," he said. The Pacific Alliance is a Latin American trade bloc which currently includes Chile, Colombia, Mexico and Peru.

© Photo : pixabay
Argentina Is Russia’s ‘Noticeable’ Partner in Latin America
According to Wong, the most important affecting the Pacific Alliance is the existence of Trump's so-called model of "neo-isolation." The alliance had been seen as a close partner of the United States and Canada; its members (less Colombia) were among the countries set to co-establish the Trans-Pacific Partnership (TPP) this month.

This initiative was nullified when Trump abandoned TPP on January 23. Trump also raised the question of revising the terms of the North American Free Trade Agreement (NAFTA).

"As a consumer, the US is in a critical situation after it greatly reduced its imports, which were supported by the free trade agreement. Trump wants to get out of it because he intends to develop national industry," Wong said, adding that this process will also be affected by the critical situation in Western Europe.

Aside from to China and Russia, Latin American countries may also invest in Africa, according to Wong.

"This is potentially a good opportunity because openness toward Africa would help promote Latin American products there and the African continent would benefit from receiving equal conditions for exchange," he said.

© AFP 2020 / Andrew Harnik / POOL
White House: Rolling Back Cuba Policy to Damage US Positions in Latin America
He added that such transparency would also be attractive for those countries in the region which are not progressive because they seek to improve relations with other regions, which could give them the opportunity to obtain a larger income.

Wong emphasized that it is Latin America distancing itself from the United States and rapprochement between Eurasia and Latin America that will pave the way for regional countries becoming more independent and sovereign.

China Poised to Challenge US Supremacy in Latin America

Russia Not Interested in Disrupting Military Balance in Latin America