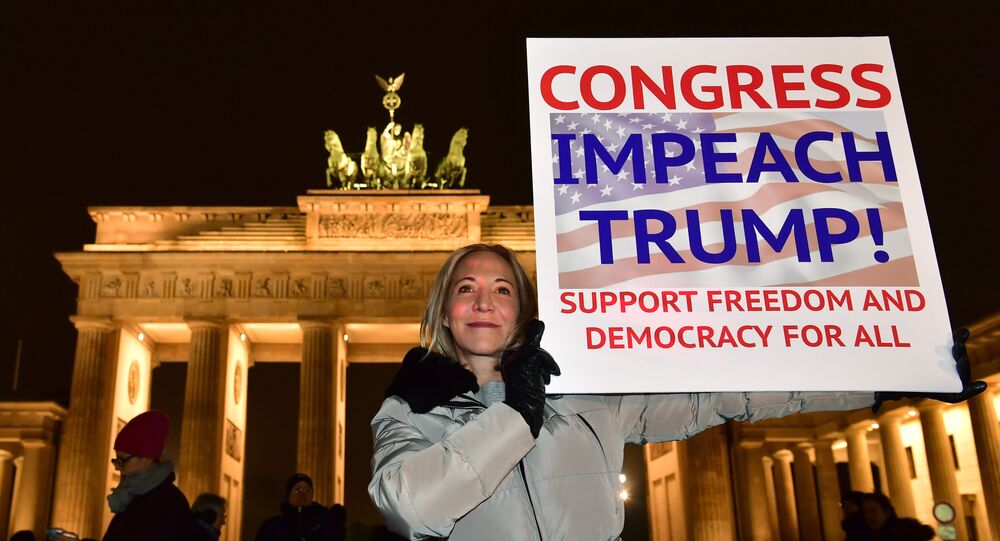 US President Donald Trump is an unpopular figure in Germany, and his threat to impose import tariffs on German cars would have negative consequences not just for the German economy, but for the US as well, Dr. Stefan Manz of Aston University told Radio Sputnik.

Washington and Berlin have enjoyed a particularly close relationship in recent years, including their negotiations on the Transatlantic Trade and Investment Partnership (TTIP) trade agreement, and support for increasing US troop deployment to Europe.

Former US President Barack Obama and German Chancellor Angela Merkel enjoyed a warm personal relationship, and Obama chose to call Merkel with his final phone call from the White House on January 19.

Obama said he wanted to thank Merkel "for her strong, courageous, and steady leadership," and "efforts to forge a deeper partnership between Germany and the United States over the last eight years."

"Angela Merkel has always had a very good relationship both with George W. Bush and the Obama administration. Obama was very fond of her and liked to have her as the main negotiating partner in Europe, actually. Now this has radically shifted with the new administration," Dr. Stefan Manz, a lecturer in German history and society at the UK's Aston University, told Radio Sputnik.

"German officials have been very frustrated at not being able to establish direct communication with their American counterparts, and all this has been exacerbated by the nationalistic tones of the new administration," Manz said.

"I think she (Merkel) made one very catastrophic mistake and that was taking all of these illegals," Trump said earlier this month in an interview with the UK's The Times newspaper and the German newspaper Bild.

© AFP 2021 / Christof Stache
Migration Crisis Costs Germany Almost $23Bln Annually
The US President also had negative words regarding German economic policy, and indicated that the EU was an extension of the German economy. "If you look at the European Union, it's Germany — it's basically a vehicle for Germany," he said.

Trump said that he would penalize German carmakers such as BMW, Daimler and Volkswagen for not producing more cars in the US, and proposed imposing a 35 percent border tax on German vehicles imported to the US market.

"If you want to build cars in the world, then I wish you all the best. You can build cars for the United States, but for every car that comes to the USA, you will pay 35 percent tax," Trump told the German newspaper.

"I would tell BMW that if you are building a factory in Mexico and plan to sell cars to the USA, without a 35 percent tax, then you can forget that."

Germany is America's largest trading partner in the EU, and German companies have created approximately 600,000 jobs in the US.

In 2015 the bilateral volume of trade was approximately $174 billion: the US is Germany's largest trading partner, and Germany is the fifth-largest for the US, behind Canada, China, Mexico and Japan.

Manz said that Trump's threat to impose import tariffs on German goods risks a trade war which would have a negative effect on employment in the US, as well as Germany.

"German is an export-oriented economy, any export tariffs or import tariffs which Donald Trump is now planning to impose really will have a detrimental effect on the Germany economy as a whole."

"Hundreds of thousands of jobs in the US are dependent on German investment. There are large BMW plants, for example, in the US, and also in Mexico. Donald Trump specifically said that a 35 percent import tariff should actually be imposed on German cars. BMW for example is currently planning a one billion [dollar] investment in a new plant in Mexico, 15 percent of the exports would go to the US and if there were 35 percent tariffs this would quite significantly damage the export industry in Germany."

Manz said that Trump is not a popular figure in Germany, despite having German ancestry through his grandfather Frederick, who immigrated to the US in the late 19th century.

Following the Second World War, the Trump family denied their German heritage and claimed to be from Sweden. However, since the late 1980s Donald Trump has declared he "loves Germany." Nevertheless, this feeling is not reciprocated in Germany, Manz said.

"There is a lukewarm reception within Germany, many Germans see him as a show-off with nothing behind him. Even the hometown of his grandfather, Kallstadt in south-west Germany, officially disassociates itself from that Trump legacy and really doesn't want to be associated with Trump."

"We all know that Trump loves to be loved, in a way, but this is certainly not reciprocated from within Germany. Whether that has an effect on his foreign policy is certainly debatable, but there is certainly an uneasy relationship between him and Germany."