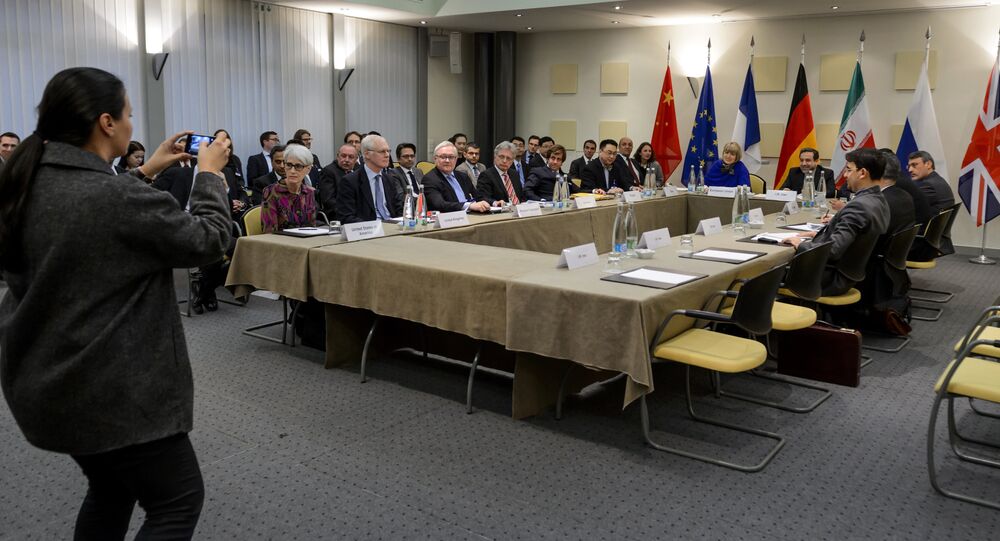 Russia is due to deliver 130 tons of natural uranium to Tehran to compensate for Iran's export of heavy water, AP quoted sources in Vienna as saying. The Austrian capital is the headquarters of the International Atomic Energy Agency (IAEA).

© Sputnik / Sergey Malgavko
Peace of Mind: Crimea’s Reunification With Russia Put Iran at Ease
AP quoted diplomatic sources in Vienna as saying that Russia will deliver 130 tons of natural uranium to Tehran to compensate for the export of Iranian heavy water.

The deal was agreed to by the P5+1 group, which negotiated the Iranian nuclear deal in 2015. These include Russia, the US, China, France, Britain and Germany.

The move has yet to be approved by the UN Security Council, which will not be a problem because the permanent five are the only members of the Council with a veto, according to sources.

They added that when in Iran, the natural uranium will be closely monitored by the International Atomic Energy Agency (UAEA) until 2040.

In an interview with Sputnik Persian, Iranian political analyst Mojtaba Jalalzadeh said that the current situation indicates the commitment of Tehran and the P5+1 to their obligations regarding the Iranian nuclear deal.

"This is another transparent and clear message to US authorities that the other signatories of the nuclear deal are not going to support Washington's unilateral sanctions anymore," according to Jalalzadeh.

He pointed out that "the P5+1's approval of Russia delivering 130 metric tons of natural uranium to Iran once again underlines the group's  push for supporting Iran in the face of radically minded opponents of the nuclear deal, especially the outgoing US administration."

© Flickr / Bastian
Washington's Dirty Laundry: Iran Wants Justice for 63 Years of US Transgressions
Jalalzadeh warned that anyone who tries to prevent the implementation of this document significantly damages the interests of all the signatories of the historic arrangement.

He predicted that under President Donald Trump, the White House will continue to criticize the Iranian nuclear deal, and maintain an irreconcilable stance on the matter.

"Washington was and will be particularly displeased with the fact that this historic document was signed thanks to Russia's active support.  This once again indicates the ongoing political confrontation between the two world powers," Jalalzadeh said.

"In any case, he went on to say, the United States will be unable to tear up the nuclear deal which was concluded within the framework of international law and approved by the overwhelming majority."

"Washington may respond by slapping more unilateral sanctions on Iran which have been adopted by the US Congress," Jalalzadeh said, also not ruling out that US President-elect Donald Trump may use stern language toward Iran and the P5+1 members.

The Iranian nuclear deal is an international agreement on Tehran's atomic program which was reached in Vienna on July 14, 2015 between Iran, the P5+1 group and the European Union.

In return, Iran will receive relief from nuclear-related economic sanctions by the United States, the European Union and United Nations Security Council.

Rouhani: Extension of US Sanctions Against Iran Violates Nuclear Deal