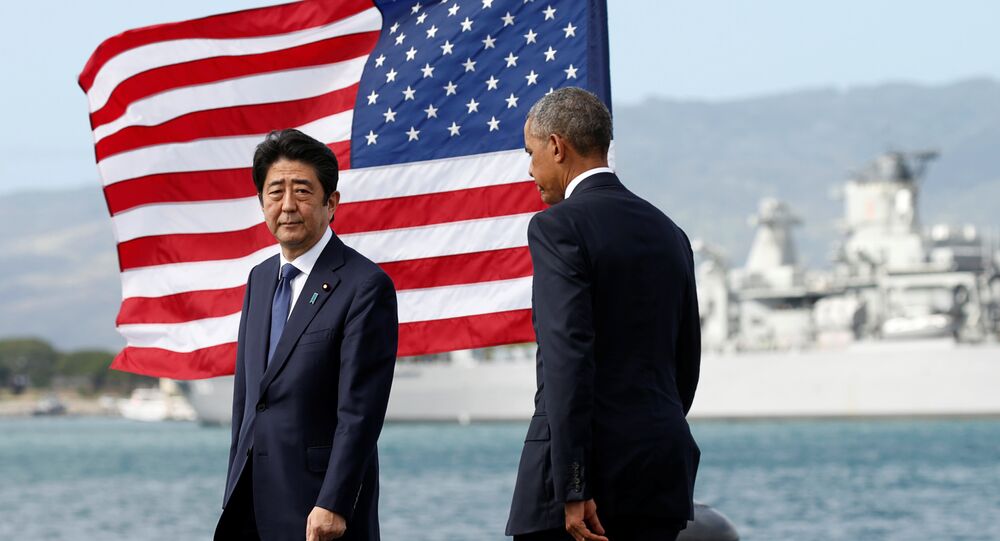 How the US Really Views Japan: Prostrate Enemy or Ally?

Following Japanese Prime Minister Shinzo Abe's recent visit to the USS Arizona Memorial at Pearl Harbor, Russian political scientist Igor Pshenichnikov explains to Sputnik that the US in facts treats Japan as a prostrate enemy regardless all the claims about being allies.

At the end of December, Japanese Prime Minister Shinzo Abe came to Honolulu and to pay a visit to the USS Arizona Memorial at Pearl Harbor.
The trip marked the first visit by a sitting Japanese leader to the location, famous as the site of the 1941 Japanese attack that ultimately provoked the US to enter World War II, although several of Abe's predecessors have been to Pearl Harbor in the past.

The visit echoed Obama's one to Hiroshima earlier in the year—as the first sitting US President to go to the site of the atomic bombing.

Sputnik sat down with Igor Pshenichnikov. Advisor to the Director of the Russian Institute for Strategic Studies to discuss how the two nations should come to terms with the legacy of World War II.

"Back then the US was shocked by a sudden attack on Pearl Harbor which undoubtedly brought instantaneous success to Japan," he told Sputnik.

© AFP 2020 / TOSHIFUMI KITAMURA
US President Barack Obama places a wreath at the cenotaph in the Peace Momorial park in Hiroshima on May 27, 2016 with Japanese Prime Minister Shinzo Abe. Obama on May 27 paid a moving tribute to victims of the world's first nuclear attack

However, he further elaborated, due to the monumental efforts and huge sacrifices made by the Soviet Union the balance turned in favor of the allies in the anti-Hitler coalition.

Afterwards, the US by far exacted vengeance on Japan of its humiliation in Pearl Harbor, he said.

The militarist Japan had long been exhausted and almost defeated by then, with mere days left before its capitulation. Hence there was no strategic need for the atomic bombings of Hiroshima and Nagasaki.

However, the political scientist noted, it was not a question of ethics for Washington: Pearl Harbor has become a moral excuse for the use of the atomic weapon. The use of it pursued long-term purposes: to achieve victory over Japan on the most favorable conditions for the US.

History has revealed the benefit to Washington: military dominance in the Asia-Pacific region. After the capitulation of Japan back in 1945, the US solidified in the region by deploying numerous military contingents in the country.

© REUTERS / Toru Hanai
Japanese PM Offers Condolences for Deaths in 1941 Pearl Harbor Attack
Thus the US turned Japan into a stronghold to face off the USSR in the Cold War. And even when the Soviet Union collapse, the US remained in the region, Pshenichnikov said.

He noted that the US currently has 94 military bases on Japanese soil and it is the largest US contingent in the Asia-Pacific. The Treaty of Mutual Cooperation and Security between the United States and Japan gives the US every right to use its military bases in Japan at its own discretion, deploy any weapons and contingents that the Pentagon deems necessary.

Any claims that the US arms deployed in Japan are for its defense remain purely fictional, he said. In reality, all the US military might is aimed at Russia, Hence Russia is forced to take retaliatory measures in response, while Japan remains an unequal partner of the US.