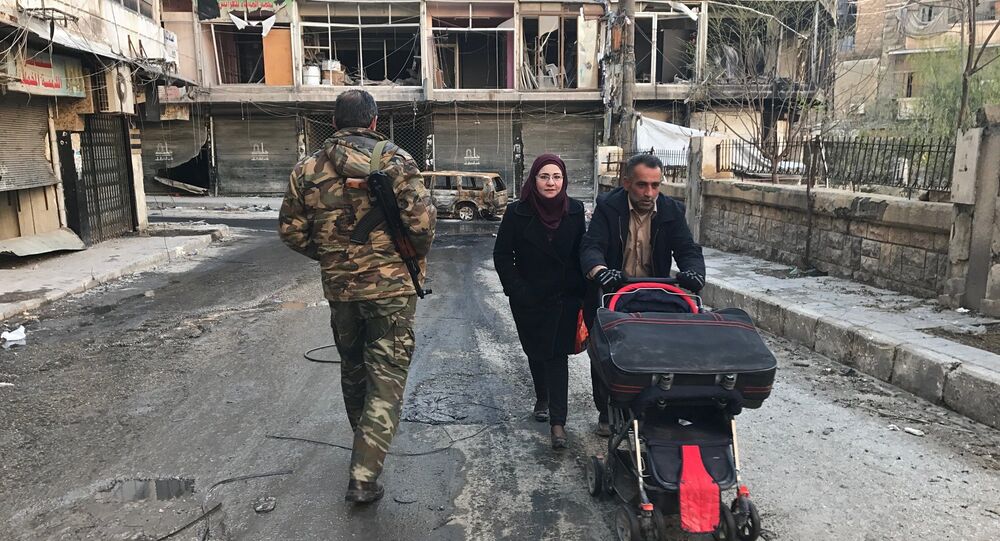 Thousands of people are returning to Aleppo, a city severely damaged by five years of war. Life is returning to normal in the liberated city, a fact that a majority of the mainstream media has chosen to ignore in their coverage of the Aleppo operation’s outcome.

© Photo : Emergencies Ministry
Reaching Out: Russian Doctors Treat Civilians in Aleppo (VIDEO)
Aleppo, once a regional industrial center accounting for over 50 percent of the country's manufacturing employment, had been almost completely ruined in the war while its eastern region remained under rebel control. Many of its factories, schools, hospitals, roads and houses have been destroyed by bombings and looted.

But despite the shocking scale of the destruction, thousands of people who had been forced to flee are now returning to their homes to begin again in the now-liberated city.

According to a top UN official, in the last couple of days alone some 2,200 families have returned to the Hanano housing district, one of the first city sectors to surrender to the militants.

"People are coming out to east Aleppo to see their shops, their houses, to see if the building is standing and the house is not that looted… to see, [if] should they come back," Sajjad Malik, country representative in Syria for the United Nations High Commissioner for Refugees (UNHCR), said.

Efforts to restore Aleppo are under way. Video reports show tractors and forklifts clearing the streets of sandbags and rubble, in a bid to bring the city back into working order. Some of the factories in the city's eastern region, where machines remained functional, have returned to work.

Organizations are also working with local government to issue documents that residents were unable to process while the sector was held by the jihadists, including registration of births, deaths and marriages.

According to Syrian Prime Minister Imad Khamis, rebuilding the city and reviving its industrial potential is a top priority for the Syrian government.

On December 16, 2016, the Russian Defense Ministry confirmed that Aleppo, previously split into the government-held western section and the militant-controlled eastern portion, had been completely liberated by the Syrian Army. Damascus has been in a state of war against a disparate group of primarily Islamist anti-government fighters since March 2011. On September 30, 2015, at the request of President Bashar Assad, Russia began providing military assistance to Syria against the jihadist militants.