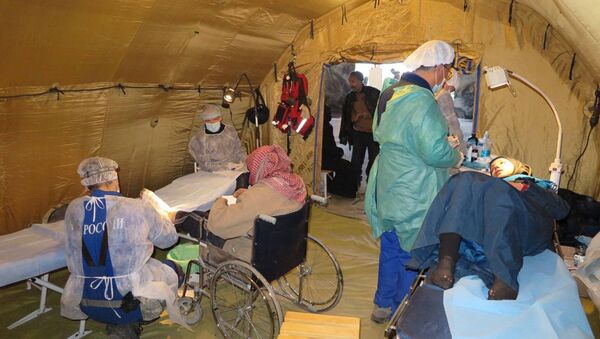 As the battle for Aleppo ended in decisive victory for the Syrian army, Russian medical personnel rushed to provide assistance to sick and weary civilians.

While the battle for the city may be over, Russian doctors in Aleppo are now engaged in a different kind of fight: a fight for the lives, health and well-being of the local civilians.

Working in makeshift tents practically around the clock, with little time between shifts to grab some foot or take a nap, Russian medics at the al-Mahaledzh camp treat about 140 people a day.

Lt. Col. Oleg Guryan, a medical officer stationed at the camp, told Ruptly that most of their patients are people seeking treatment for "purulent diseases."

"People with injuries [which became] infected after mine-explosive and gunshot wounds come here. People haven’t bandaged [their wounds] for a very long time – for five-seven days and even more," Guryan said.

The first Russian mobile hospitals were deployed to Aleppo in November 30. On December 5 a mortar attack against one of these facilities, carried out by terrorists entrenched in the city, claimed the lives of two Russian nurses, Nadezhda Durachenko and Galina Mikhailova, and injured Col. Vadim Arsentyev, a pediatrician.