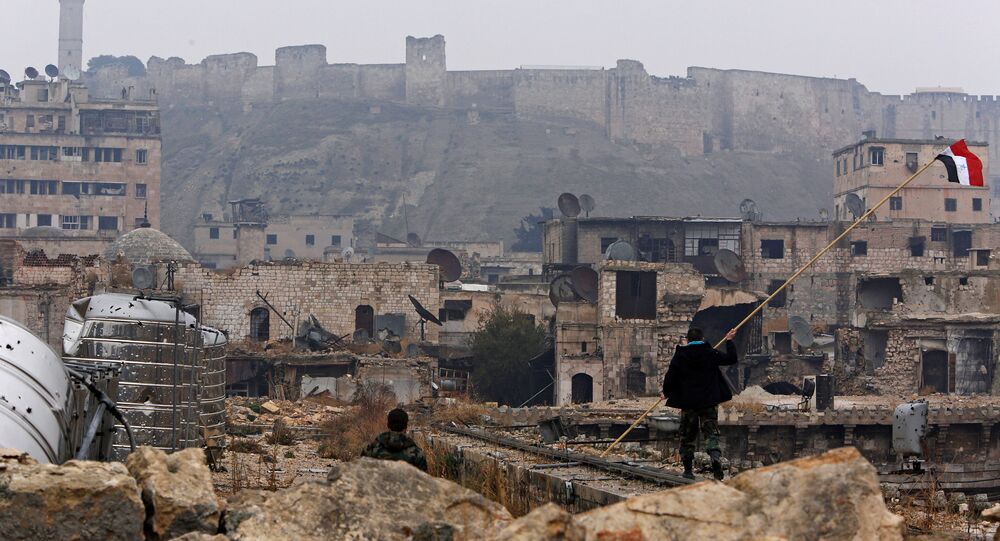 Western officials and media have been engaged in a vast information campaign to accuse Syrian and Russian forces of allegedly killing civilians in Aleppo, journalist and political commentator Alexander Khrolenko wrote in a piece for RIA Novosti.

"Western media outlets are distributing synchronized lies about the situation in Aleppo. The Internet is flooded with videos showing the 'last words of Aleppo residents.' All of them are shot with mobile phones in the style of the Al-Jazeera broadcaster. But what is the reason?" Khrolenko wrote.

According to the author, all of the above proves this media war has "certain goals."

According to the amnesty law, Syrian government forces let militants who lay down their arms leave eastern Aleppo.

"All these militants have blood on their hands. Such a humanistic approach has nothing to do with numerous claims by Western media about 'mass killings of civilians.' All these claims are a lie," the article read.

© AFP 2021 / GEORGE OURFALIAN
Videos of Alleged 'Russian Strikes, Firing Squads' in Aleppo Staged by Militants - Russian MoD
According to the journalist, this "desperate" propaganda would only be useful if the United States and its coalition allies were preparing for an intervention in Syria.

Social networks and news outlets are full of "terrifying pictures and videos from Aleppo." The author noted that all those videos are made in the same style by "professionals, including directors and journalists."

The West is Losing in Syria

According to Khrolenko, the main reason behind the Western media hysteria about the situation in Syria is the fact the West is losing the fight against the Syrian government and President Bashar Assad.

"A US-led coalition is losing ground in Syria. For five years, Washington and its allies has been using opposition forces and jihadists in an attempt to topple Assad," he wrote.

Aleppo is one the Syrian economic centers, situated 145 kilometers from the country’s largest port Latakia and a Russian military facility. Aleppo is the gateway to northern Syria, allowing for control over the border areas with Turkey and northwestern Iraq.

"The liberation of Aleppo has significantly weakened Islamists in the neighboring province of Idlib and created a threat to Jihadist groups in Raqqa and Deir ez-Zor as well as militants-controlled oilfields in the valley of the Euphrates. It will also help to curb terrorists’ incomes and trade communications with Turkey," the article read.

According to the author, opponents of Bashar Assad understand the importance of the Aleppo liberation, making desperate attempts to distract the Syrian Army from the city, including a recent attack on Palmyra.

Aleppo 'Rebels' are no Heroes

© Sputnik / Ali Hassan
Evacuation of 5,000 Militants, Families Begins in Eastern Aleppo – Russian Chief Of Staff
It may be surprising but British newspaper The Independent provided a view of the situation, which is different from what other Western outlets have done.

"We refer to them as 'rebels' – as if they were the Maquis fighting in the French resistance or Partisans freeing Yugoslavia from the Nazis or, indeed, the insurgents of Warsaw struggling for freedom from the German SS. Which they clearly are not," journalist Robert Fisk wrote in an article.

According to him, there are no real 'rebels' in Aleppo, except for those who are filmed for propaganda footage.

"For months, Western reporters have failed to state the obvious: that they cannot send their dispatches from 'rebel' areas because the 'rebels' would slit their throats open – or hand them over to other 'rebels' who would," the journalist noted.