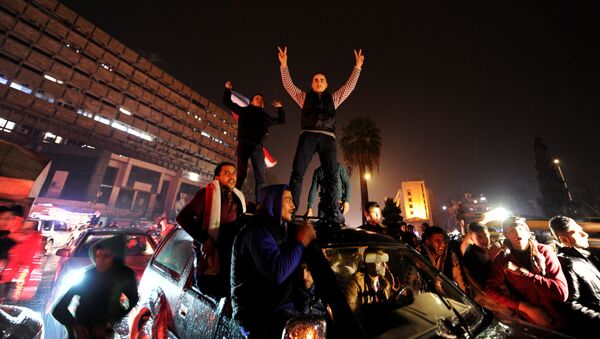 Hundreds of people were seen celebrating throughout Aleppo immediately after the Syrian government announced that the entire city had been liberated from terrorists who had controlled eastern Aleppo for four years.

Civilians finally allowed to walk freely reported stories of militants threatening to kill anyone who tried to escape besieged enclaves, using them as ‘human shields.’ Humanitarian organizations working in Syria also confirmed that Aleppo residents are safe after the city was liberated.​

However, the mainstream media presented a completely different picture: the Syrian army hunting down rebels, executing civilians en mass, and operating an indiscriminate bombing campaign destroying what’s left of what used to be Syria’s biggest metropolis.

"It’s almost as if two different battles were being written about," Alexander Mercouris, editor-in-chief at The Duran, told Brian Becker on Radio Sputnik’s Loud & Clear program.

Zeir Ra’ad al-Hussien, a UN human rights official, wrote that the Assad administration is “palpably failing” at protecting innocent civilians, a statement that got amplified by the New York Times.

“The secretary general himself of the UN Mr. Ban Ki-moon, was previously saying these reports are unverified” Mercouris said. “So we’re basically looking at a propaganda campaign,” he added. For his part, Becker pointed out that “When it’s convenient, the US uses the UN … as an extension of American power, but then gives it the seeming legitimacy of being an international body,” Becker said. The UN accuser is from Jordan, which has been a logistics hub for bringing in resources that produced widespread suffering. “It’s dripping with hypocrisy” he said.

"He himself [al-Hussein] is a Jordanian prince, he was also part of the international criminal court that was also targeting leadership in former Yugoslavia after the US helped with NATO to bomb and destroy Yugoslavia. So there’s been a long continuum," Becker said.

Current anti-Assad propaganda could be the result of interests outside Washington seeking to box in the Trump administration on Syria. Nearby Jordan, for instance, argues for Assad’s downfall “more vigorously” than the US, Mercouris said.