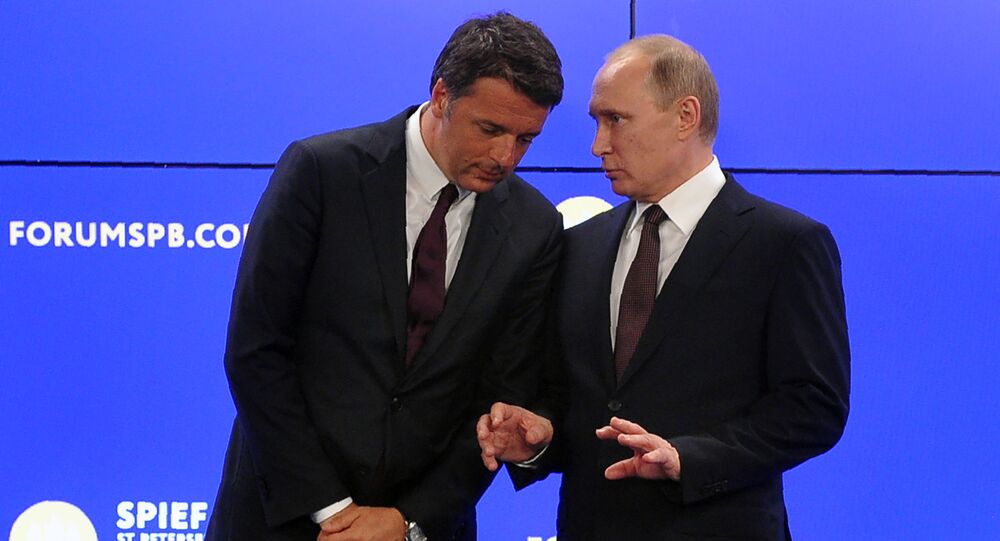 If Hillary Clinton comes to power in the United States, Italy will no longer be able to play a double game with Russia, according to the French newspaper Les Echos.

© Flickr / www.davidbaxendale.com
EXCLUSIVE: 'Made-in-Italy' Economy a Match for Russia Amid Europe's Meltdown
Italy is currently playing a double game, the French newspaper Les Echos reports, citing Rome's move to develop trade ties with Russia while simultaneously voicing its unwavering political commitment to the US and NATO.

Italy can only continue to play both sides under Donald Trump, Les Echos argues, adding that if Hillary Clinton wins in the November 8 presidential elections in the US, Rome will fully adhere to Washington's demands. However, it's added that the current Italian government is supporting Hillary Clinton.

In this context, Les Echos quoted Italian Prime Minister Matteo Renzi as saying that imposing new sanctions against Russia will be tantamount to slapping them against the Italian economy.

That is why Renzi along with current EU Foreign Affairs chief Federica Mogherini decided to put pressure on other European leaders during a recent EU summit, where Renzi warned that fresh anti-Russian sanctions should only be an option, according to Les Echos.

This is the option that Italian businessmen, who have already lost about 3.6 billion euros in damages due to the sanctions spat with Russia, want to avoid at all costs, the newspaper said.

The retaliatory Russian embargo affected all segments of Italian exports, including the agriculture sector, Les Echos said, adding that it is the close bilateral trade ties that explains Rome's traditional conciliatory attitude towards Moscow.

© Sputnik / Iliya Pitalev
Italy, Russia Sign Contracts Worth $1.57 Bln at SPIEF Amid Sanctions
According to Les Echos, Italy has to be torn between its economic interests related to Russia and its political loyalty to Washington.

On the one hand, the newspaper said, Rome warns against the new anti-Russian sanctions, but on the other – it confirmed that in 2017, 140 Italian soldiers will be sent to Latvia as part of the project to increase the NATO contingent in the Baltic States. Additionally, media reports said that Italy will be at the helm of the NATO Rapid Response Force in the Baltic Sea.

Les Echos quoted geopolitics expert Germano Dottori as saying that if Italy completely yields to Washington's demands, Rome will replace the UK as the main mediator representing the US's interests in Europe after Brexit.

"So it is safe to say that the heart of Italy, or to be more exact, its export expectations are torn between Washington and Moscow," Les Echos concludes.

A diplomat present at last week's EU summit was quoted by the Financial Times as saying that Renzi led the pushback at the EU leader’s summit in Brussels against the UK, German and French proposal to impose new sanctions on Russia over its role in Syria.

© Flickr / Francesca Cappa
Italy's Liguria Regional Council Adopts Resolution Recognizing Crimea Part of Russia
Renzi took the lead in the effort to remove the threat of sanctions from the European Council’s draft statement after Austria, Spain, Greece and Cyprus voiced their reservations, according to the diplomat.   Earlier in October, Italian Defense Minister Roberta Pinotti said that Rome remains committed to dialogue with Moscow despite the Ukrainian crisis.

In an exclusive interview with Sputnik in September, Rosario Alessandrello, President of the Italian-Russian Chamber of Commerce, specifically heaped praise on bilateral economic cooperation in light of the economic crisis in Europe.

He said that the economies of Italy and Russia complement each other, offering desirable advantages amid the economic meltdown in Europe.

Italy Not Giving Up Dialogue With Russia Despite Ukraine Issue