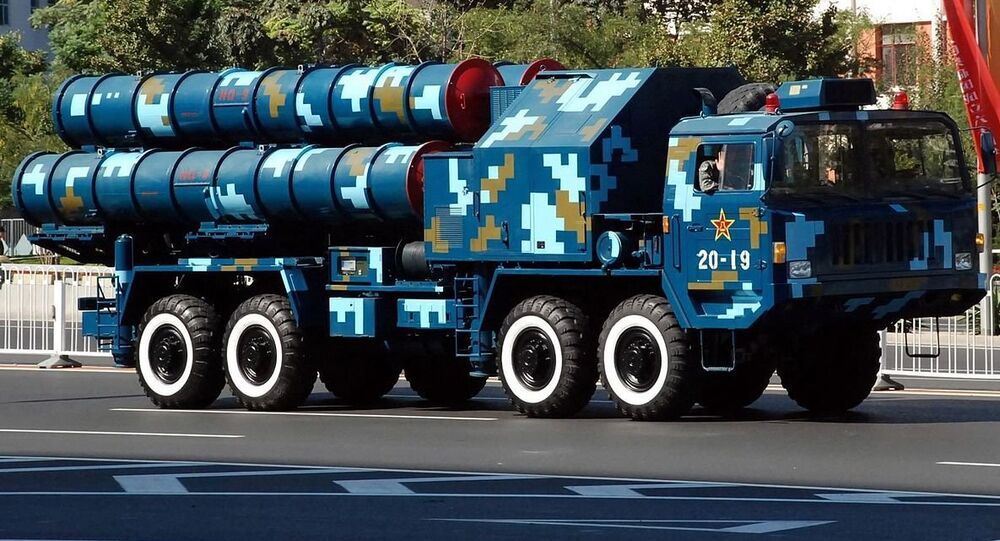 Speaking at the forum, Major-General Cai Jun of the Chinese People's Liberation Army (CPLA) announced that China and Russia will carry out their second joint missile defense military exercises next year.

The plan follows the successful computerized joint exercise by the Russian and Chinese missile defense command in May this year. The joint exercises are set to become Russia and China's third annual set of joint military exercises, in addition to the "Peace Mission" and "Naval Interaction" drills.

Vasily Kashin, senior fellow at the Russian Academy of Science's Far Eastern Studies Institute, told Sputnik that May's computerized exercises were modeled on China's HQ-9 anti-aircraft missile systems, which can be used to shoot down short-range ballistic missiles and some types of medium-range missiles.

"One can assume that the exercises worked on interaction between Russian and Chinese missile defense forces, which requires the creation of a system of automated data exchange between radar stations on both sides," Kashin explained.

© Sputnik / Grigoriy Sisoev
Russian Base in Tartus to Give Russia 'Much More Formidable Position' in Mediterranean
Kashin said that naming the new exercises "Aerospace Safety" suggests they will involve the expansion of frameworks of cooperation to enable anti-missile systems to better track targets.

Russia and China both see the deployment of US missile defense systems covering large parts of Europe and Asia as a threat to their security, so holding joint anti-missile drills makes sense, Kashin said.

"The trajectory of American Intercontinental Ballistic Missiles (ICBM) towards Russia and China runs through the North Pole, and data from Russian warning stations could be useful to the Chinese. On the other hand, data from Chinese radar stations monitoring the South Pacific and Indian Oceans could be useful for Russia."

© Sputnik / Valeriy Melnikov
An S-400 surface-to-air missile system
"The automatic exchange of information is not an easy task, given the differences in equipment and organizational structures responsible for the missile defense system in both countries," Kashin said.

The decision to increase anti-missile cooperation follows last month's announcement by Washington and Seoul that the US THAAD anti-ballistic missile system is set to be deployed in South Korea.

The US and South Korea have sought to justify the deployment by citing recent nuclear tests by North Korea. However, both Russia and China see THAAD as a threat to regional and national security.

© Sputnik / Sergey Guneev
Russia, China & Independent Allies Forming 'New Alliance in Opposition to US'
Kashin said that while the enhanced Sino-Russian cooperation could be seen in this context, "from a military and weapons technology point of view, developing your own missile defense system can't be a response to the deployment of an enemy missile defense system."

"You have to respond to the strengthening of an enemy's defenses with measures which help to break through that defense."

"A reasonable military response would be the deployment of strike weapons which would enable the destruction of the US missile defense system in the south of the Korean peninsula at an early stage of conflict. That is most likely to entail additional Chinese ballistic and cruise missiles, deployed in the north-east of the country."

"The Russian-Chinese cooperation in the field of missile defense is best considered a consequence of the general state of the two countries' relations with the US, and an important indicator of that their interests are converging," Kashin concluded.

Some 1,000 Residents of S Korea's Gimcheon Rally Against US THAAD Deployment