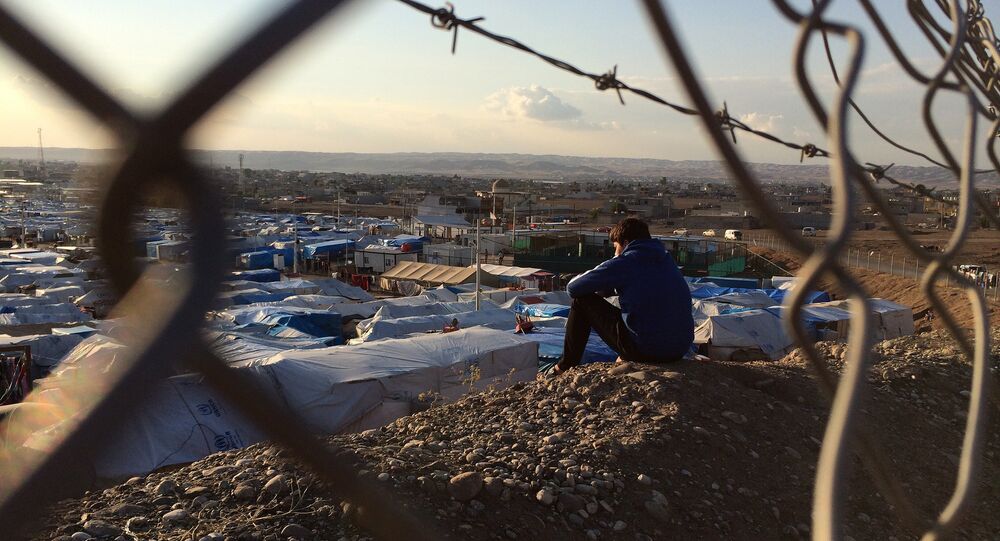 The declaration on refugees adopted on the sidelines of the UN General Assembly (UNGA) is "ridiculous," as it fails to trigger real action among the main world powers to address the crisis, Director General of Medecins Sans Frontieres (MSF, or Doctors Without Borders) in the Netherlands Arjan Hehenkamp told Sputnik.

MOSCOW (Sputnik) — The New York Declaration for Refugees and Migrants was adopted during Monday's Summit for Refugees and Migrants that took place on the sidelines of the 71st UNGA session. In the declaration, UN member states committed to begin by 2018 the negotiations on holding an international conference that should adopt new migration and refugee agreements as well as addressing the issues of human trafficking and border control.

"It is utterly ridiculous. To come together at a time of peak human needs, in which almost all the powers of the UN Security Council are involved directly or not, and then agree just that in two-years time they will come together in order to have some agreements on how to tackle this, is utterly irresponsible," Hehenkamp said.

He added that the situation in Syria in two years’ time could only get worse.

"It's betrayal of basic human values. There is a peak human need now, let's respond to it now. In these two years many people will die," Hehenkamp said.

© REUTERS / Stefan Wermuth
UN Migrant Summit 'Missed Opportunity' for Rich Countries to Take More Refugees
Members of the UN Security Council are the key stakeholders, who can have real influence on the warring parties in Syria to establish peace, or at least allow for humanitarian access, he noted.

He added that Russia has been responding "very generously" to the Ukrainians fleeing conflict in their home country.

"That's a proper thing to do. That is what I would like to see more from Russia also toward Syrians," he added.

A massive refugee crisis is currently unraveling, with hundreds of thousands of undocumented migrants fleeing crisis-torn countries in the Middle East and North Africa to escape violence and poverty. Syrians are the largest group of international refugees, as the war in Syria has left millions without a home.

Humanitarian aid for Syrians will remain very limited as long as insecurity in the country prevails and aid workers and convoys risk being attacked, Director General of Medecins Sans Frontieres (MSF, or Doctors Without Borders) in the Netherlands Arjan Hehenkamp told Sputnik.

"As long as insecutity in Syria remains as significant as it is today, including attacks on humanitarian organizations, medical facilities and doctors, and as long as all the parties to the conflict do not prioritize giving safe access to humanitarian agents, then all help is going to be very limited. What we can do is work through local initiative, we can try to be flexible and adaptable where we can. But it will always be far too limited," Hehenkamp said.

Hehenkamp stressed that the level of human suffering in the war-torn country is "unprecedented."

"It's also hard to underestimate [overestimate] the limited extent to which we have access to these populations, as a result of insecurity and of the lack of political will to allow for humanitarian access," the MSF official added.

The United Nations suspended the movements of its aid convoys in the crisis-torn Syria following the attack, but said they were ready to renew these activities when the situation becomes safer.

The EU-Turkey deal on migrants refuses humane responsibilities to people who have been caught up in conflict in the Middle East and North Africa, Director General of Medecins Sans Frontieres (MSF, or Doctors Without Borders) in the Netherlands Arjan Hehenkamp told Sputnik.

"We very much dislike the EU-Turkey deal. We think it's basically refusing humane responsibilities towards people who were caught up in conflict… We have denounced this deal, and as a result we have refused funding from all the European states who have been involved in it," Hehenkamp said.

Hehenkamp said he is very pessimistic with regard to the situation in which Syrians are caught up in light of EU countries "increasingly shutting down borders for Syrian refugees."

"It cannot be an only European solution. It is not only a question of geographical coincidence of being close to the conflict… Europe will have to change its policies, accept Syrian refugees. The same applies to China, Latin America, the United States, Russia and the rest — all countries with reasonable infrastructure and resources," Hehenkamp said.

© AP Photo / Burhan Ozbilic
Ankara Not to Fulfill Turkey-EU Migrant Deal in Full Without Visa Liberalization - Minister
Europe is struggling to find a solution to a massive refugee crisis, with hundreds of thousands of refugees fleeing conflict-torn countries in the Middle East and North Africa.

Most of these migrants choose prosperous EU member states as their final destination. In 2015, EU border agency Frontex detected some 1.83 million illegal border crossings into the bloc.

More Than 220,000 Refugees From Africa Plan to Cross Mediterranean Into EU

UAE to Welcome 15,000 Syrian Refugees Over Next 5 Years