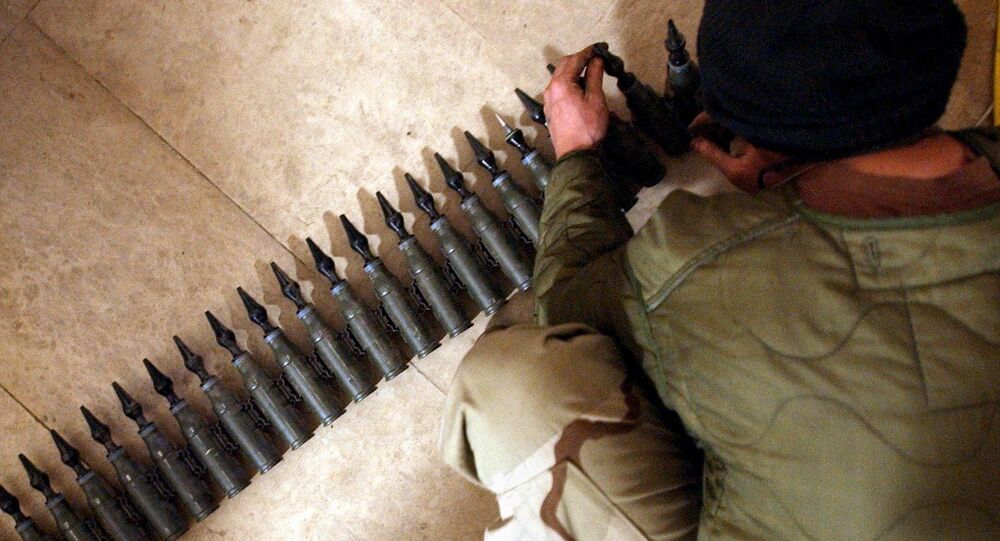 Despite the fact that depleted uranium munitions employed by the US and NATO forces during combat operations in former Yugoslavia and Iraq ruined the lives of countless innocent civilians and servicemen, the powers that be appear reluctant to even discuss this problem and eager to punish those who go against their wishes.

© AFP 2020 / AFP
How the US Used NATO to Turn Western Europe Into Washington's Vassals
The fate of Frieder Wagner is a peculiar example of what happens when you stand up to the establishment's injustice. A notable director who won the prestigious German Grimme Award, responsible for numerous documentaries for the ARD and ZDF channels, he quickly became a pariah after making a movie called Deadly Dust (Todesstaub) about the use of depleted uranium (DU) shells by NATO forces in the Middle East and in the former Yugoslavia.

In an exclusive interview with Sputnik, Wagner explained that Deadly Dust is based on an earlier documentary called The Doctor, the Depleted Uranium, and the Dying Children (Der Arzt und die verstrahlten Kinder von Basra) that he filmed for WDR. In April 2004 the movie was screened during the anniversary of the Chernobyl nuclear disaster. But even though that autumn it received the ÖkoMedia award, it was never screened again. And no matter what ideas he came up with, the TV channels that he previously worked with stopped sending him new orders for some reason.

"I contacted a head of the WDR editorial office whom I'd worked with before and asked him what happened. He paused for a second and then told me "The WDR editorial office considers you a ‘difficult’ person. And most importantly, the topics you suggest are especially hard. Right now I’ve got nothing more to tell you"," Wagner explained.

He added that about a year ago he met with Siegesmund von Ilsemann, an editor at Spiegel magazine who wrote a comprehensive report about the 'deadly dust' and its effects, and who revealed to the astonished director that the use of depleted uranium by the military literally became a taboo subject in Germany.

"He told me that the issue of DU munitions use and its consequences became taboo in Germany. And no TV channel or newspaper would allow even him – a person who worked on this subject for a long time – to publish anything related to it," Wagner added.

DU shells are made of byproducts of uranium enrichment. Their superior armor-piercing capabilities make them a potent anti-tank weapon, especially considering that when an armored vehicle gets hit by such a shell, the impact and subsequent release of heat energy causes it to ignite, incinerating the target’s interior. But it’s the ‘deadly dust’ produced by a DU shell detonation that is probably the most insidious aspect of this type of ordnance.

"At such a high temperature the substance – depleted uranium – burns down to nano-particles, each of them a hundred times smaller than a red blood cell. And due to their extremely small size, these particles 'travel' through a human body, infiltrating brain, lungs, kidneys, placenta, bloodstream and even sperm and egg cells which causes severe developmental diseases in newborns," Wagner said.

According to him, US forces actively used DU munitions in Kosovo, Somalia, Libya and during both Iraqi campaigns, not to mention that they keep using them in Afghanistan up to this day.

"I’ve travelled to Iraq and Kosovo myself. We collected soil, water and tissue samples. All tissue samples contained depleted uranium particles, and even worse, they contained the so called uranium-236 which can only be produced artificially," he said.

He also pointed out that the families of 16 out of 109 Italian soldiers who died of cancer sued the Italian government. During the trials, which the plaintiffs won, it was established that the fatal disease in all cases was caused by the use of DU munitions in Iraq and Kosovo.

And yet, much to Wagner’s surprise, no global wave of outrage spearheaded by the UN, Amnesty International and similar organizations took place over these developments.

"It should’ve happened a long time ago. In 2001 in Germany and in many other European nations the press wrote a lot about the first deaths among the Spanish and Portuguese soldiers in Kosovo. The then-Defense Minister of Germany Rudolf Scharping nearly lost his position. But then NATO and the UN decreed that this topic must be removed from the media – and they succeeded," Wagner surmised.