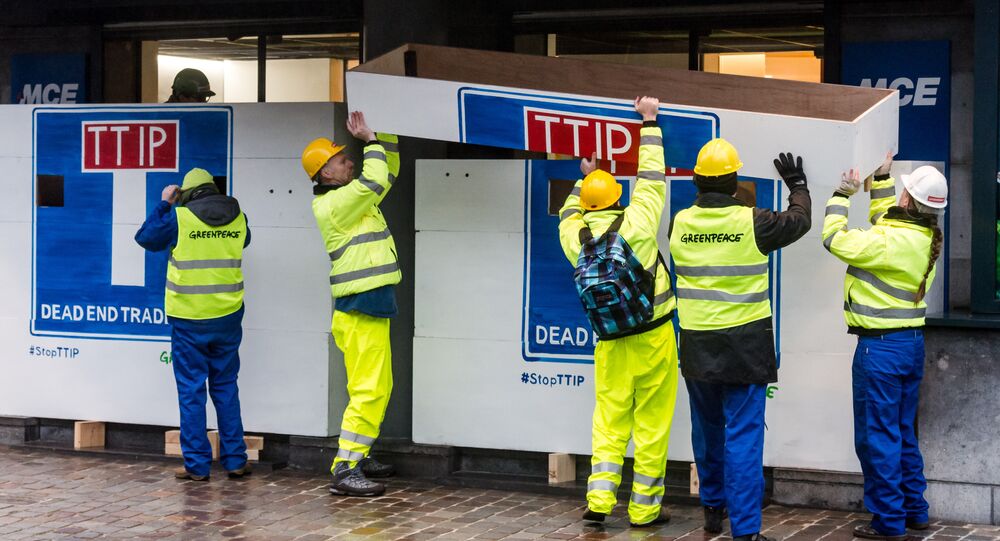 Leading politicians in Germany and France are mistaken to say that TTIP is dead in the water, Washington's Trade Representative Michael Froman told the German news website Der Spiegel.

© AP Photo / Markus Schreiber
Berlin's Bold TTIP Declaration is Just Pre-Election Hype
While leading politicians in France and Germany have said that the Transatlantic Trade and Investment Partnership (TTIP) agreement is effectively dead, US Trade Representative Michael Froman told Der Spiegel that his government is still confident an agreement will be signed by the end of the year.

On Tuesday, French Trade Minister Matthias Fekl told radio station RMC that "there is no more political support from France in the negotiations," and called on the European Commission to stop negotiations with the US.

On Sunday German Vice-Chancellor Sigmar Gabriel said that negotiations between the US and EU on the Transatlantic Trade and Investment Partnership (TTIP) had come to a halt, putting an end to the plan.

"In my opinion the negotiations with the United States have de facto failed, because we Europeans did not want to subject ourselves to American demands," Gabriel, who is also Minister for Economic Affairs, told German broadcaster ZDF.

However, on Wednesday an "irritated" Froman told Der Spiegel that TTIP is still very much alive, and contradicted Gabriel.

"I do not share the assessment of Minister Gabriel. The reaction from the Chancellor's office and the European Commission shows that they also see things differently. In trade talks, nothing is agreed until everything is agreed. Progress is not measured by how many negotiating chapters have been closed, but by whether both sides can find solutions to all problems," Froman said, and expressed surprise at the negative discourse around TTIP in Europe.

Froman said that TTIP negotiations have made good progress in some areas, and cited the lifting of customs duties as one area of agreement.

"We are already agreed on the elimination of 97 percent of customs duties," Froman said.

"We have agreed to harmonize the regulations and make them more transparent, and maintain high standards in health and safety, the environment and labor," said Froman, listing some of the concerns expressed about the TTIP deal.

© Flickr / Global Justice Now
Brexit is Nail in the Coffin for TTIP, But TAFTA is Still Alive and Kicking
The US trade chief said that despite Europe's opposition, his government is still confident that it can wrap up a deal by the end of the year, and called TTIP an "important opportunity" to "strengthen the transatlantic partnership and connect both continents in order to shape a global trading system."

"Time is short, but with the necessary political will in the negotiations, we believe that we can still achieve our aim of closing a very good deal this year," Froman said.

In a sign of the sway of multinationals in the negotiations, one FoI request found that during the course of TTIP negotiations from January 2012 – February 2014, the EU Commission's trade department held ten times more meetings with business lobbyists than with trade unions or consumer groups.

© REUTERS / Kai Pfaffenbach
Dead in the Water: German Consumer Champion Kills Transatlantic Trade Deal
Another area of concern is the loosening of European regulations in areas such as privacy, the environment, health and safety and worker's rights, since US regulation offers less protection in these areas. TTIP proposes dialogue between regulators on existing and future legislation, giving the US an opportunity to exert influence on EU regulatory proposals before they are considered by elected bodies such as the EU Council and European Parliament.

Another major concern is that multinational companies could use the Investor-State Dispute Settlements (ISDS) proposed by TTIP to sue national governments if their policies cause them to lose profit.  The clause can be exploited by multinationals to claim compensation from governments, even if the legislation in question protected public health.