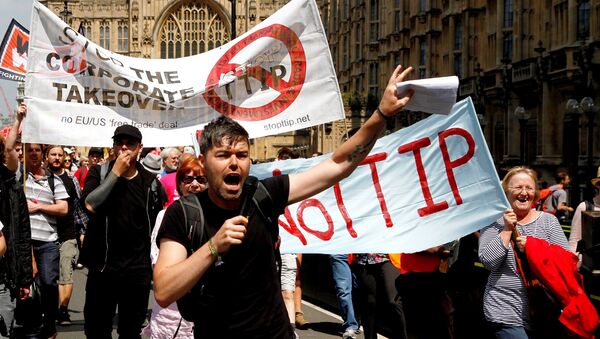 Berlin's Bold TTIP Declaration is Just Pre-Election Hype
On Sunday German Vice-Chancellor Sigmar Gabriel said that negotiations between the US and EU on the Transatlantic Trade and Investment Partnership (TTIP) had come to a halt, putting an end to the plan.

"In my opinion the negotiations with the United States have de facto failed, because we Europeans did not want to subject ourselves to American demands," Gabriel said.

On Tuesday, French Trade Minister Matthias Fekl agreed, and called on the European Commission to stop negotiations with the US.

Belgian MEP Marc Tarabella told Sputnik Francais that the government objections are likely to spell the end of the agreement, because MEP's will probably vote against it.

"That a high-ranking German politician (Vice-Chancellor and Minister for Economic Affairs Sigmar Gabriel) has made that kind of statement is encouraging," Tarabella said.

"This treaty has failed, it's not a free trade agreement. This is an agreement on trade and investment which is aimed at protecting large enterprises and enabling them to influence public institutions and laws which protect the environment, health and the workers' rights."

"There has been strong pressure on the European Commission for a long time, and a lot of criticism both from society in the US and in Europe. The EU doesn't want to understand that the public is against this agreement," Tarabella said.

Transatlantic Trade Deal on the Rocks as France, Germany Urge Pullout
The MEP said that a European Parliament vote blocking the agreement is more likely to happen before Brexit happens, and the UK leaves the bloc.

"I think the majority of UK representatives to the European Parliament are probably against the TTIP project. It would be better to hold the vote before the UK leaves," Tarabella said.

Charles-Henri Gallois, economic spokesman for France's Eurosceptic Popular Republican Union party, told Sputnik that elections being held in the US, Germany and France over the next 18 months are an important factor for politicians who are keen to be seen listening to voters' concerns.

"Discussion of this topic is being postponed for the election period. Something similar happened with the TiSA (Trade in Services Agreement, currently being negotiated by 23 members of the World Trade Organisation). TTIP is very unpopular in Europe, but it doesn't have much support in the US, either."

Gallois said that while the UK's exit from the EU might affect the fate of TTIP, the Transatlantic Free Trade Area (TAFTA) proposal is still on the table.

"Taking into account that all the other countries listen to the US … I think that Brexit won't directly affect the negotiations for TAFTA, which will surely be resumed soon," Gallois said.

Dead in the Water: German Consumer Champion Kills Transatlantic Trade Deal
The Transatlantic Trade and Investment Partnership is a bilateral trade agreement which has been under negotiation, behind closed doors, between the US and EU for three years. Opponents to the deal have long complained about its secrecy, with much of the information about the content of the negotiations coming from leaked documents and Freedom of Information requests.

The content of the deal has been severely criticized; among the major concerns is that multinational companies could use the Investor-State Dispute Settlements (ISDS) proposed by TTIP to sue national governments if their policies cause them to lose profit.  The clause can be exploited by multinationals to claim compensation from governments, even if the legislation in question protected public health.

For example, when the German government phased out nuclear power in the wake of Japan's Fukushima disaster in 2011, Swedish nuclear plant operator Vattenfall sued Germany for €3.7 billion ($4.7 billion), under the ISDS clause of a treaty on energy investments. TIIP also proposes changing European law regarding privacy, health and safety and employment; US regulation offers less protection in these areas.

000000
Popular comments
All these so-called "free trade agreements" have to be stopped because they are nothing but corporate banker takeovers... the EU on steroids. Look at what the EU has done: * made all of Europe the vassals of the multinational bankers, * took away their sovereignty, * forced debts on member countries that they would not have otherwise taken on and as such will never be able to repay, * when a country such as Greece finally succumbs to the onerous debt, the bankers line up for the auctioning off of state assets... everything from water plants and power generation on out * Ultimately, resulting in collapse. Look at some of the smaller eastern bloc countries that also made the mistake of joining the EU. Look at what NAFTA did to the US: exported the entire US manufacturing infrastructure and of course, the jobs. They removed the manufacturing jobs away from the very people who are the primary buyers of those products!
revsuzanne
1 September 2016, 06:35 GMT
000000
Newsfeed
0
New firstOld first
loader
LIVE
Заголовок открываемого материала
Access to the chat has been blocked for violating the rules . You will be able to participate again through:∞. If you do not agree with the blocking, please use the feedback form
The discussion is closed. You can participate in the discussion within 24 hours after the publication of the article.
To participate in the discussion
log in or register
loader
Chats
Заголовок открываемого материала
Worldwide
InternationalEnglishEnglishMundoEspañolSpanish
Europe
DeutschlandDeutschGermanFranceFrançaisFrenchΕλλάδαΕλληνικάGreekItaliaItalianoItalianČeská republikaČeštinaCzechPolskaPolskiPolishСрбиjаСрпскиSerbianLatvijaLatviešuLatvianLietuvaLietuviųLithuanianMoldovaMoldoveneascăMoldavianБеларусьБеларускiBelarusian
Transcaucasia
ԱրմենիաՀայերենArmenianАҧсныАҧсышәалаAbkhazХуссар ИрыстонИронауОssetianსაქართველოქართულიGeorgianAzərbaycanАzərbaycancaAzerbaijani
Middle East
Sputnik عربيArabicArabicTürkiyeTürkçeTurkishSputnik ایرانPersianPersianSputnik افغانستانDariDari
Central Asia
ҚазақстанҚазақ тіліKazakhКыргызстанКыргызчаKyrgyzOʻzbekistonЎзбекчаUzbekТоҷикистонТоҷикӣTajik
East & Southeast Asia
Việt NamTiếng ViệtVietnamese日本日本語Japanese中国中文Chinese
South America
BrasilPortuguêsPortuguese
NewsfeedBreaking
11:06 GMTResearch Shows Advantages of Human Adenoviral Vector Jabs, May Give Boost to Russia's Sputnik V
11:04 GMTPrevent & Channel: Are UK Schemes to Prevent Radicalisation Actually Working?
10:45 GMTFive People Killed, Two Injured in Ammunition Depot Blast in Central Syria, Source Says
10:38 GMTNetflix's Net Profit Increases 1.8 Times to $1.4Bln in Q3
10:37 GMT'Are We Afraid of Bangladesh?': Indian Nationalists Slam Modi's 'Inaction' Over Attacks on Hindus
10:18 GMTJason Momoa Reveals He Injured His Eyes, Ribs While Filming Aquaman 2, Needs Surgery
10:14 GMTDeripaska Condemns FBI Raids of His Relatives' Homes in US
10:07 GMTQueen Elizabeth II Scraps Planned Visit to Northern Ireland Following Doctors’ Advice
09:59 GMTMemes Flood Twitter as Atletico Boss Simeone Refuses to Shake Liverpool Manager Klopp's Hand
09:27 GMTFM Lavrov: Russia Regrets US Absence at Moscow-Format Meeting on Afghanistan
09:13 GMTLavrov: Daesh and al-Qaeda are Trying to Take Advantage of Instability in Afghanistan
09:05 GMTBannon's Refusal to Testify on Capitol Riot is Sign That He and Trump Planned It, Claims Liz Cheney
08:43 GMTVideo of Russian SU-30 Fighters Escorting US B-1B Bombers Over Black Sea Emerges Online
08:28 GMTFloods and Landslides in Northern India Kill 46 - Videos
08:24 GMT'More Pick and Mix Than Substantial Meal': British 'Net Zero Strategy' Panned Amid Planned Tax Hikes
08:10 GMTUS Surgeons Successfully Transplant Pig's Kidney Into Human for the First Time
07:25 GMTFinland Presses Sweden to Return Historic Skulls Exhumed for Racial Biology Studies
06:55 GMTTwo Russian Jets Intercept American Bombers Over Black Sea
06:32 GMTDeripaska's Spokesperson Links FBI Raids of Relatives' Homes to Sanctions
06:31 GMTFinnish Military Lowers Physical Condition Threshold to Include 'PlayStation Boys'