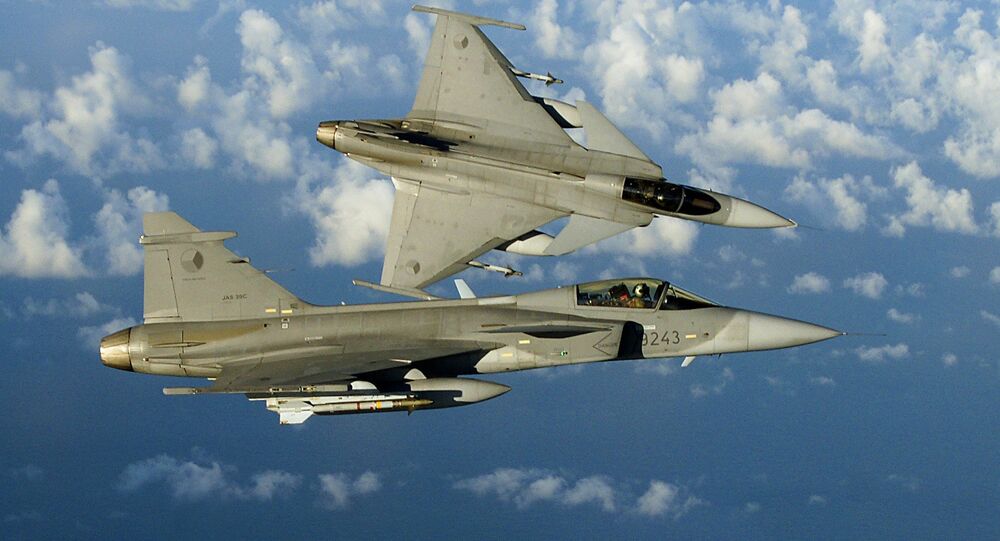 NATO is holding major military exercises on Czech territory, and wants to force Prague to endorse Brussels and Washington in the fight against terrorism, Viktor Baranets, a military expert from the Russian newspaper Komsomolskaya Pravda, told Sputnik.

© AFP 2020 / JANEK SKARZYNSKI
Saber-Rattling vs Common Sense: Unprecedented NATO War Games in Poland 'Remarkably Foolish'
In an interview with Sputnik, Viktor Baranets, a military expert from the Russian newspaper Komsomolskaya Pravda, said that NATO's major military exercises on Czech soil are helping the alliance resolve several tasks; first and foremost, the drills allow NATO to prod Prague to show adherence to the stance of Brussels and Washington in the fight against terrorism.

The interview came after an international air force exercise, dubbed Ample Strike 2016 (AMSE16), involving 1,500 troops from 17 NATO member and partner states kicked off in the Czech Republic on August 30.

Apart from making Prague show its loyalty to NATO, the drills also aim to test the Czech Republic's combat readiness in light of the US-led coalition's ongoing air campaign against Daesh, according to Baranets.

"To understand the meaning of these exercises, one should take into account a few things, including the fact that although the coalition officially involves as many as 62 states, only the 5-6 most active NATO members are taking part in the air campaign. It irritates Washington, which does not want NATO's formal participation in the fight against Daesh," he said.

In this regard, the Ample Strike 2016 drills are aimed at rectifying this situation, he added, recalling that the war games are being held in the Czech Republic, a country that Baranets said pursues an independent policy in the face of Washington and Brussels.

Asked about security-related issues during the drills, he warned that the war games pose a "real threat" to the local population.

Recalling that just 34 warplanes are taking part in Ample Strike 2016, Baranets said that the participation of even such a limited number of aircraft in the drills is fraught with grave consequences, given the Czech Republic's small territory and high population density.

"Even the participation of 15 warplanes in drills in the Czech Republic poses a serious threat to the population, and in this case, the probability of a loss of human lives in the event of an emergency is quite high. But these considerations are not taken into account when it is necessary to tie a small albeit irreconcilable state to the chariot of NATO," he added.

Commenting on the fact that it is European, not American, generals who are at the helm of Ample Strike 2016, Baranets said that Washington apparently wants to see how the European military leadership will be able to respond to a hypothetical Russian strike in the absence of the United States. Moscow, by the way, typically prefers turn a blind eye to such NATO drills, he noted.

© AP Photo / JANEK SKARZYNSKI
Aggressive Agenda: NATO BALTOPS Drills Aimed at 'Isolating Russia'
Foreign troops will be represented by 24 jets and helicopters, including Lithuanian L-39, German PC-9, LearJet and Tornado, Polish Su-22, Hungarian SAAB-39 Gripen, Slovenian PC-9, US AH-64 helicopters and a KC-135R tanker, as well as B-1 and B-52 planes. The AMSE16 are scheduled to wrap up on September 20.

The official goal of AMSE16 is to hone the interactions between ground-based forward air controllers and the crews on board planes and helicopters, which are tasked with striking the ground targets of hypothetical opponents. The aircraft involved in the exercises will depart from airfields in the United Kingdom, Germany and Hungary as well as from the Czech Republic.

Between 2003 and 2015, NATO has conducted a series of international air force exercises in the Czech Republic, including Flying Rhino, Ramstein Rover and Ample Strike.