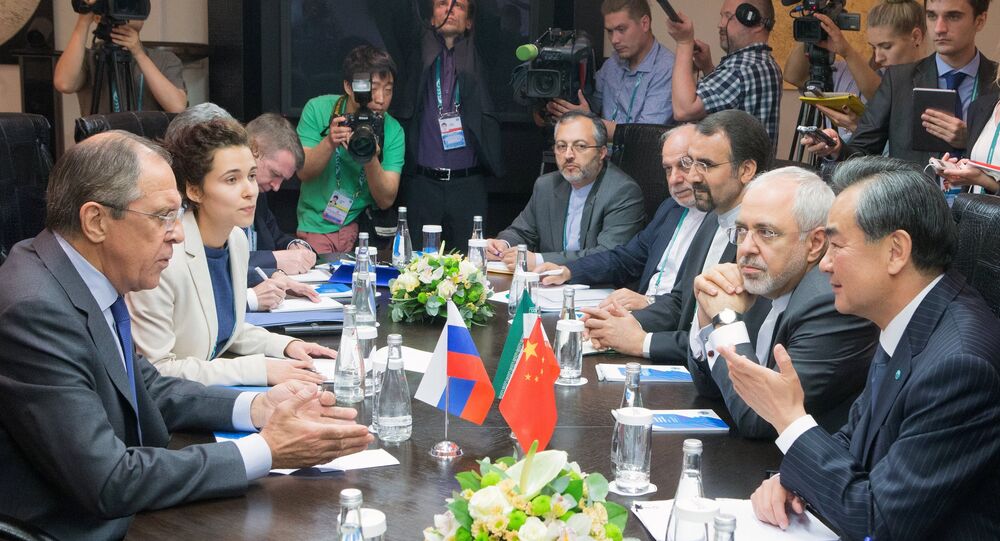 Cooperation between Russia, Iran and China might signal a formation of a new world paradigm, able to re-define the global situation in the world both politically and strategically; the recent developments in the relations between the three might be more significant than many realize, according to an American investigative journalist.

The journalist was referring to the recent two-day visit of Chinese President Xi Jinping to Tehran and the outcome of his trip.

Xi Jinping was the first international leader to head to Iran after the trade restrictions were removed and capped his visit with 17 agreements for cooperation in areas including energy, trade, and industry.

The two countries also agreed to increase bilateral trade more than 10-fold to $600 billion in the next decade.

In addition, Xi Jinping signed a joint statement with President Hassan Rouhani in support of Iran's application for full membership in the Shanghai Cooperation Organization (SCO), advocated by both Russia and China.

Tehran applied for full membership in the SCO back in 2008, but due to international sanctions it was unable to gain full membership. Now, with sanctions lifted, the Iranian government said one of its priorities would be to get full SCO membership.

Russia is also boosting ties with Iran after an international nuclear accord was reached. The two countries have signed an agreement on the easing of travel procedures between the two starting from February.

© AP Photo / Ebrahim Noroozi
Iran, China Boost Cooperation, Sign 17 Agreements - Reports
Back in December, Russian Minister of Trade and Industry Denis Manturov said during his visit to Tehran that “Russia is interested in dialogue with Iran about the potential of cooperation in aviation, shipbuilding, energy, agriculture and transportation, metallurgy, pharmaceutical and other industries.”

Carol Gould noted that this strategic alignment is based on trade, not on military might, and it definitely signals a way forward to a new alliance.

Also, she stressed, it might be very beneficial to China.

“China needs some help at the moment, its economy grew too fast, the markets in Europe, the US, the UK did not produce much income for China, because those countries are having a lot of problems,” she noted, adding that in a situation when some western banks might be failing again, or having a meltdown, similar to that of 2008, such cooperation might be very beneficial.

Coming in From the Cold: Rouhani in Europe to Discuss Post-Sanctions Iran