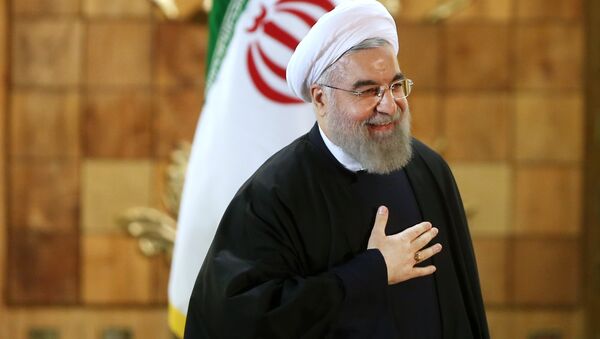 During his two-day visit to Iran on Saturday, Chinese President Xi Jinping signed a joint statement with President Hassan Rouhani in support of Iran's application for full membership in the SCO.

Iran applied for full membership in the SCO back in 2008, but due to international sanctions it couldn't become a full member of the organization. Now, with the sanctions lifted, the Iranian government said one of its priorities would be to get full SCO membership.

"The plan for Iran to become a full-fledged member and no longer just an observer in the SCO will be really pushed forward. As far as I'm concerned both China and Russia are on board for Iran to be part of the organization," Heydarian told Radio Sputnik.

China would also be interested in becoming one of the major buyers of Iranian oil. Having been excluded from the international market due to the sanctions, Iran would want to ramp up the export of its oil. Even low global oil prices wouldn't deter Iranians from increasing their share of oil sales. China certainly wouldn't mind that, the professor of political science said.

Iran Ready to Share Anti-Terror Experience With SCO States - Ambassador
Furthermore, Iran would become an even more important player in the gas market, as the country has the second largest natural gas reserves after Russia.

Closer cooperation with the SCO means that China would have an opportunity to develop closer economic ties and build a joint project with Iran, Heydarian said.

In July, Iran signed a historic deal with the P5+1 group of international mediators, including Russia, the United States, China, Britain, France and Germany, to ensure the peaceful nature of Tehran's nuclear program in exchange for the easing of sanctions.

The SCO is a political, economic and military alliance comprising Russia, China, Kazakhstan, Tajikistan, Uzbekistan and Kyrgyzstan. Pakistan and India's applications to join the SCO were accepted in July, however they will only officially accede to the organization following the completion of certain procedures.

000000
Popular comments
Again who was talking about isolation? The same who are losing ground on the geopolitical chessboard.