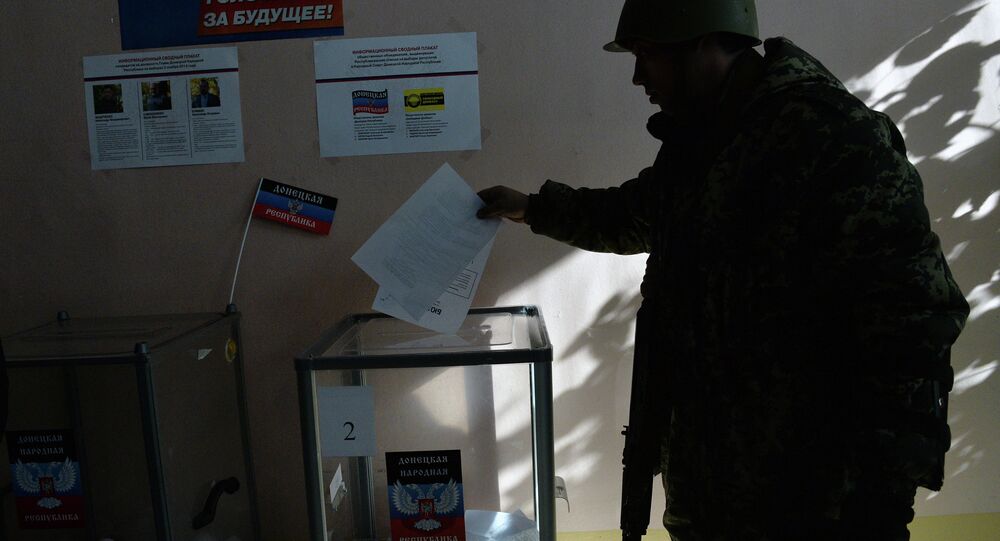 What does Russia have to do with Ukraine's local elections, and how could they become a pretext for a new round of anti-Russian sanctions? As it turns out, for the West, they are directly intertwined. One of Russia's newspapers has figured it out.

© Sputnik / Maksim Blinov
Donetsk Republic Leader Dismisses Rumors About Referendum on Joining Russia
The US and the EU have found a new pretext for the next batch of anti-Russian sanctions: they've decided to link the local elections in Ukraine to Russia's presumed responsibility for them.

The West is convinced the Russia has unlimited influence on the leadership of the self-proclaimed Lugansk and Donetsk republics and thus Russia will bear all the responsibility for their refusal to hold local elections on October 25, the day the rest of Ukraine goes to the polls, according to Russia’s daily newspaper Kommersant.

The self-proclaimed republics of Donetsk and Lugansk decided to hold separate elections on October 18 and November 1, when they will pick their mayors and district governors, respectively.

“If the representatives of Donetsk and Lugansk continue pressing their point and the elections in Donbass take place on a different day than in the rest of Ukraine, don’t comply with the Ukrainian laws and aren't monitored by international observers, it will be a serious – and demonstrative – blow to the Minsk accords,” the newspaper quotes one of the diplomats as saying.

“In fact, it will be the last 'nail in the coffin' of the peaceful agreements. Nobody in Europe or the US believes that Russia can’t influence the 'separatists' for them to turn off this dangerous road,” another diplomat told the newspaper.

© REUTERS / Axel Schmidt
Kiev Defies Minsk Accords, Resists Western Demands for Donbass Self-Rule
The diplomats did not elaborate what particular sanctions would then be considered.

A high-ranking official in the Kremlin, quoted by the newspaper, named all the attempts of the western diplomats to link Moscow’s responsibility to the local elections in the self-proclaimed republics a “shell game”.

“They are implementing the Minsk accords extremely loosely,” he said. “It is complete stupidity to accuse us of not fulfilling them. Is the word “Moscow” used in these agreements at least once? Not a single time. Thus, we don't owe anything.”

Steinmeier: Ukraine’s Reforms to Be Prerequisite for Donbass Elections

Not Recognizing Donbas Elections Could Mean the End for Ukraine