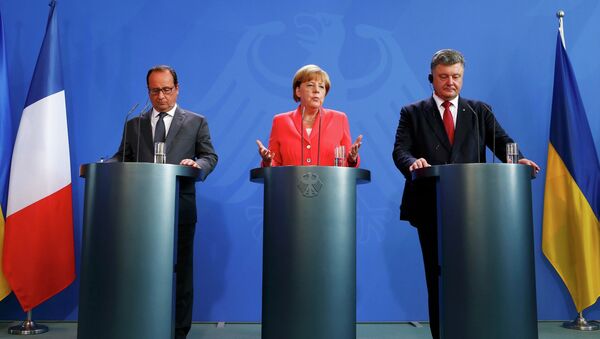 Article 4 of the 13-point Minsk Protocol outlined the modalities of conducting local elections in particular districts of Donetsk and Lugansk regions and their future status.

Article 11 described decentralization of particular districts of Donetsk and Lugansk regions and their special status as the key elements of the proposed constitutional reform in Ukraine.

Briefing the media after the talks, Angela Merkel said that  the three leaders had gathered in Berlin to endorse the Misk-2 accords, which she described as pivotal to a peaceful settlement of the Ukrainian conflict.

Addressing members of his Solidarity bloc shortly before the August 24 trip to Berlin, Petro Poroshenko said that the proposed constitutional reforms ruled out any federalization or other special statuses for any part of Ukraine.

000000
Popular comments
Amerofascists pulling the nazi puppet strings.
Zhukov
30 August 2015, 09:05 GMT2
000000
Doens't kiev get his civilians killing orders from the west so how can it resist the same western demands for Donbass self-rule? This makes absolutely no sense at all and more and more it seems that the whole western political body is one big circus. How can anyone take these people serious is beyond me.