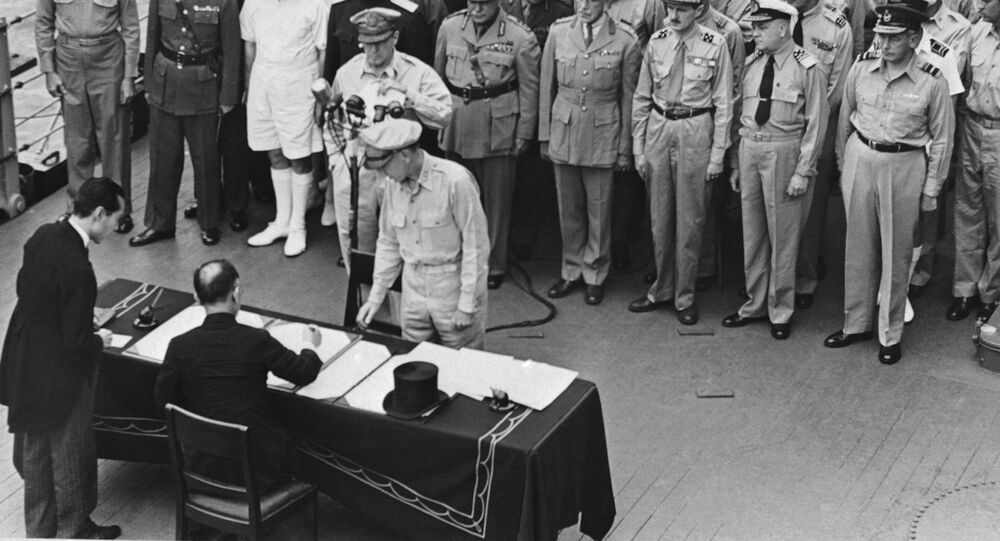 China celebrates on Wednesday the 70th anniversary of Japan's surrender in the Second World War, when the Soviet Union came to Beijing’s aide on the eastern front.

© REUTERS / Issei Kato
70th Anniversary of Japan's Surrender in World War II
MOSCOW (Sputnik) — The announcement of Japan's surrender was made on August 15, 1945. The signing of a surrender document and a formal surrender ceremony occurred on September 2, officially ending the Second World War.

China, which suffered from Japanese militarism from as early as 1931, when the Imperial Japanese Army occupied the northeast region of Manchuria, will hold a number of events on September 2-3, commemorating the anniversary of Japan's surrender. A major military parade will be held on Tiananmen Square in Beijing, with delegates from a total of 30 countries, including Russia, expected to attend.

In Russia, September 2 is celebrated as the Commemorative Day of Ending World War II in honor of the memory of Russian compatriots who fought in the war.

© Sputnik / Michael Klimentyev
On the day of the 70th anniversary of the end of WWII, President Vladimir Putin, third from right, takes part in a wreath-laying ceremony by the Trans-Baikal Residents' Military and Labour Glory memorial.

On August 8, 1945, the Soviet Union officially joined the 1945 Potsdam declaration, a statement that called for the surrender of all Japanese armed forces in World War II, in line with the decisions made at the Yalta and Potsdam conferences, and formally declared war on Japan.

© REUTERS / Toru Hanai
Japan's Abe to Skip Beijing World War II Parade
Prior to the USSR’s entry into the war against Japan, the United States had used nuclear weapons for the first time in history, dropping atomic bombs on the Japanese cities of Hiroshima and Nagasaki on August 6 and 9.

During the final stages of World War II, the Red Army conducted the Manchurian offensive from August 9 to September 2, in order to defeat Japan’s Kwantung Army, liberate the northern and northeastern Chinese provinces Manchuria and Inner Mongolia, the Liaotung Peninsula, Korea, and eliminate a bridgehead of Japanese aggression on the Asian continent and the country’s major regional military and economic potential.

On August 10, Mongolia joined the war against Japan. Soviet warplanes bombed the enemy’s military installations in Harbin, Changchun and Jilin, as well as troop formations, communications networks and lines of communication near the Soviet border. The Pacific Fleet sailed into the Sea of Japan, cut shipping lanes linking Korea and Manchuria with Japan, with its warplanes and ships hit Japanese naval bases in Yuki, Rashin and Seishin.

With the defeat of the Kwantung Army and the loss of its military and economic potential in northeastern China and North Korea, Japan was no longer able to continue the war.

On September 2, 1945, Japan’s then-Foreign Minister Mamoru Shigemitsu, acting as a representative of the Emperor and Government of Japan, and General Yoshijiro Umezu, then chief of the Imperial Japanese Army General Staff, signed the instrument of Japan’s unconditional surrender aboard the battleship USS Missouri in Tokyo Bay at 9:04 a.m. Tokyo time (00:00 GMT).

On behalf of all the Allied Powers at war with Japan, the document was signed by US Gen. Douglas MacArthur. On behalf of member countries it was singed by Adm. Chester Nimitz from the United States, Lt. Gen. Kuzma Derevyanko from the Soviet Union, British Adm. Bruce Fraser and Gen. Xu Yongchang from China.

Representatives of Canada, France, Australia, New Zealand and the Netherlands also inked the document. Japan accepted all the conditions of the 1945 Potsdam Declaration. Under the unconditional surrender instrument, Japan immediately ceased hostilities, all Japanese armed forces and all armed forces under Japanese control surrendered unconditionally. All weapons, military and civilian property were to remain intact.

Japan’s Government and General Headquarters were instructed to immediately release Allied prisoners of war and civilian internees. All Japanese civilian, military and naval officials pledged to obey and fulfill the orders and directions of the Supreme Commander for the Allied Powers. The latter exercised authority over the Emperor and Government of Japan while running the country. The Supreme Commander of the Allied Powers also had the right to take whatever steps he deemed necessary to enforce the terms of the instrument of surrender.

© REUTERS / Damir Sagolj
Putin en Route to China for WWII Parade, Signing Some 30 Bilateral Treaties
Under the Potsdam Declaration, the sovereignty of Japan was restricted to the islands of Honshu, Kyushu, Shikoku and Hokkaido, as well as the smaller islands of the Japanese archipelago, as stipulated by the Allies. The islands of Etorofu, Kunashiri, Shikotan and Habomai were ceded to the USSR.

The Far Eastern Commission and the Allied Council for Japan were established by a decision of the 1945 Moscow Conference of Foreign Ministers of the Soviet Union, the United States and the United Kingdom to monitor the implementation of the terms of the unconditional surrender.

The World War II lasted six years, from September 1, 1939 through September 2, 1945, and involved 61 states with population of 1.7 billion. Hostilities raged in 40 countries.

The World War II was the bloodiest and most destructive conflict in history, killing over 55 million people. The Soviet Union suffered most of all, with 27 million war fatalities.