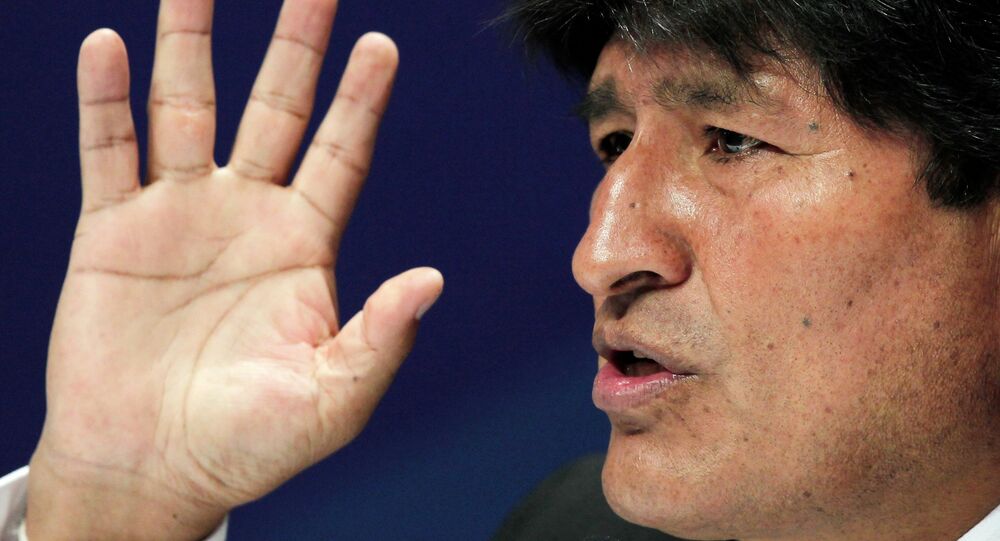 Bolivian President Praises RT for Being the Voice of Developing Countries

The Russian channel RT has become the voice of the people and the revolutionaries, it deserves admiration, Bolivian President Evo Morales recently remarked in response to statements made by the US Broadcasting Board of Governors' CEO Andrew Lack, who had named the channel, along with Islamic State militants, as the main challenge facing his agency.

© Sputnik / Evgeny Biyatov
RT Under Attack for Challenging US Media’s Foreign Policy Narrative
MOSCOW, January 30 (Sputnik) – Bolivian President Morales has called the Russian television channel RT the voice of revolutionaries and of the peoples of the world, and stated that it deserves admiration.

Despite smear campaigns, misrepresentation of facts, and outright lies, such media should continue their work to give the microphone to the peoples of the world, added the Bolivian head of state.

His comments follow statements made last week by the CEO of the US Broadcasting Board of Governors (BBG), Andrew Lack, who labelled RT as one of the main challenges to his agency, along with radical militant groups such as the Islamic State (IS) and Boko Haram.

The statements have already prompted a backlash, with the vice chair of the Society of Professional Journalists' Ethics Committee, Fred Brown, saying that RT's broadcasting should not have been assessed by the US BBG based on uninformed assumptions, and asserting that in the US, such reporting is a Constitutionally-protected form of free speech.

Fred Brown stressed that alternative reporting is an important element of the open exchange of views protected in the United Stated by the First Amendment.

Fwd: @GovJVentura: Comparing RT to ISIS? Big Brother should NOT be telling us what to watch: http://t.co/UEMY5z9hQl/s/bVDP #NewsIsNotTerror

The statements triggered an online campaign under the hashtag #NewsIsNotTerror, which supports the channel and has spoken out against the ridiculous claims.

RT's leadership has already announced that it would send letters to the BBG, the US State Department and the US Embassy in Russia demanding an explanation why the channel was compared to IS extremists.emists.