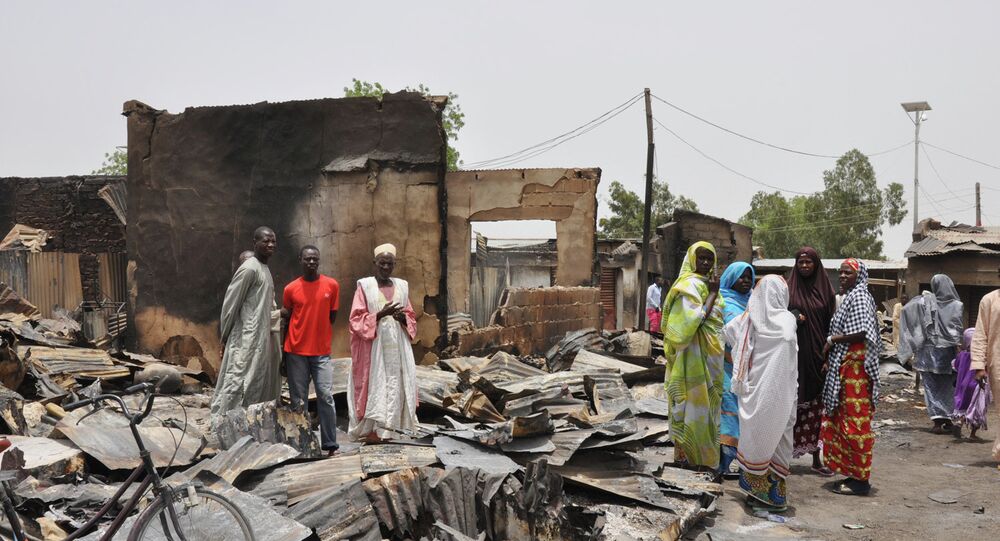 Three people were killed and 46 were injured when two suspected child suicide bombers blew themselves up in a market in northeastern Nigeria on Sunday. A day earlier, another bomb strapped to a 10-year old girl claimed the lives of at least 16 people in the northern regions of the country.

Experts cited by the news agency believe that Boko Haram uses children it kidnaps to carry out such suicide attacks.

"It is highly likely that Boko Haram is conscripting young girls to use as suicide bombers," Elizabeth Donnelly, assistant head of the Africa program at the think tank Chatham House in London, told NBC News, adding that the children were basically "slaves fed by countless abductions since the crisis started."

© AP Photo
Shocking Images of Boko Haram Devastation in Nigeria Released
According to Fox News, US lawmakers are already demanding that the Obama administration consider a more comprehensive military effort in Nigeria. However, the news agency points out that a growing mistrust between the US and Nigerian officials may pose a significant problem for this endeavor.

An international campaign, "bring back our girls", attracted the support of the US; it was launched in response to the massive kidnapping of teenage girls in Nigeria by Boko Haram in early 2014. However, it has failed to produce significant results. Furthermore, the US has refused to sell sophisticated military equipment – such as Cobra helicopters – to Nigeria, claiming that the country would be unable to use or maintain it.

As a result, in December the Nigerian government halted a joint effort with the US to train local troops to fight Boko Haram, Fox News observes.

Meanwhile, Boko Haram’s leader Abubakar Shekau had expressed his satisfaction with the recent terrorist attack at the Charlie Hebdo editorial offices in Paris, stating that his group was "very happy with what happened at the heart of France," according to Bloomberg. "Oh you French people, oh you who follow the religion of democracy, between you and us is enmity to eternity," Senkau said in a video address posted on YouTube on Wednesday.