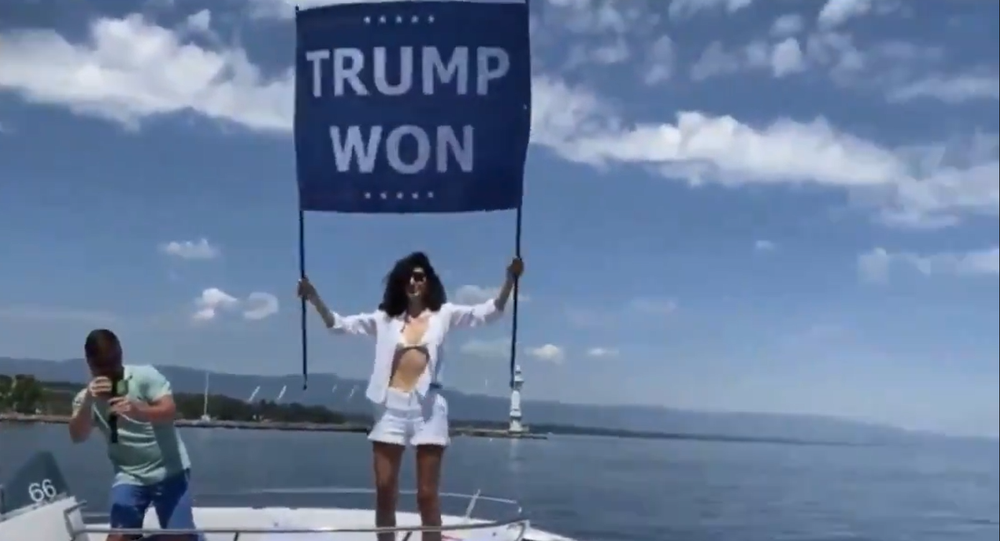 The summit of Russian President Vladimir Putin and US President Joe Biden took place earlier in the day in the Swiss city of Geneva, lasting around 4 hours and covering many issues, including cyber security, the pandemic, bilateral relations, and human rights.

Noor bin Laden, a niece of the late ex-leader of the Al-Qaeda* terrorist organization, Osama bin Laden, was spotted in Geneva on a boat on Wednesday, waving a poster with the words 'Trump won' in a protest against the Putin-Biden summit.

Video and photos shared on social media also show at least one other boat with the same flags drifting nearby.

On her Instagram page, Noor confirmed her protest, saying that Swiss police "threatened to arrest" her because of her baseless political belief. According to her, "two police boats and further away a military boat" were deployed to stop her protest.

​She also posted a photo of herself with her 'Trump won' poster, captioning it "Switzerland does not want the world to see this".

Noor bin Laden is a vocal supporter of the former US president, Donald Trump. Trump has refused to accept the victory of Joe Biden in the 2020 presidential election in America.

The summit ended after around 4 hours of talks, with both sides offering positive feedback after the meeting.

Biden Speaks to Media After Summit With Putin