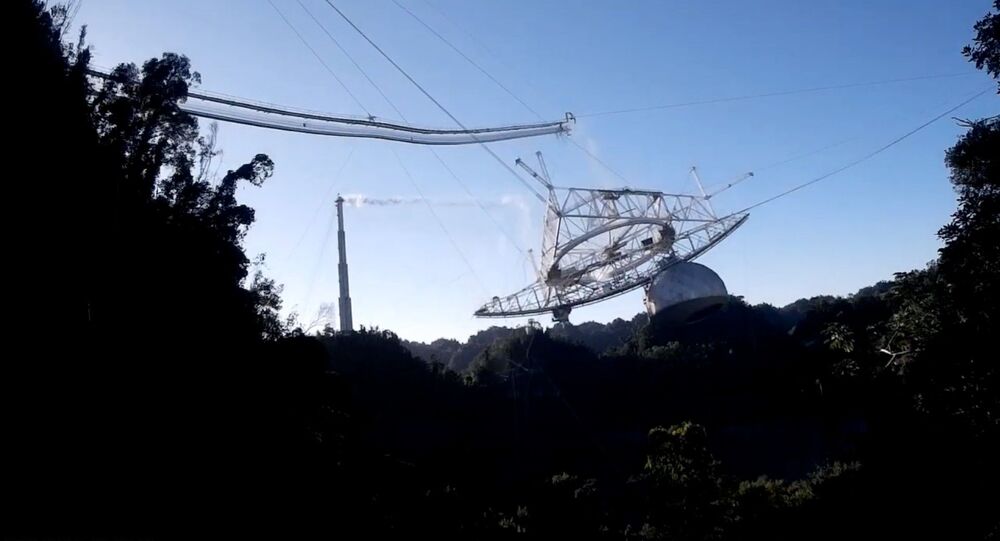 After suffering several cable malfunctions throughout the last several months, the radio telescope at Puerto Rico’s Arecibo Observatory collapsed on itself on Tuesday. The devastating and shocking end to the iconic structure came ahead of the US National Science Foundation’s (NSF) planned demolition at the observatory.

The NSF on Thursday released remarkable surveillance footage that managed to capture the exact moment that additional support cables snapped and sent the 900-ton radio instrument crashing down onto the 1,000-foot-wide reflector dish platform.

Footage released by the scientific body is composed of two separate clips, the first of which came from a security camera located in Arecibo’s Operations Control Center. The second clip was captured by a drone flying above the telescope that had been examining the structure’s support cables at the time of the collapse.

The NSF agency, which oversees the Arecibo Observatory, had been conducting hourly drone observations of the telescope after engineers had first sounded off warnings that the aging radio telescope was likely to collapse.

Although a full investigation into the collapse is ongoing, a statement issued by the NSF to The Drive’s War Zone reveals that the telescope’s demise came about moments after the cables from the top of the observatory’s Tower 4 broke and destabilized the platform.

John Abruzzo, a contractor at engineering consulting firm Thornton Tomasetti, which was hired by the NSF, told reporters Thursday at a news conference that the work site created a “dangerous situation.” He added that “those cables could have failed at any time.”

While officials reported that the incident caused no injuries, they did reveal that the sudden development caused some damage to the observatory’s learning center, which was struck by falling cables.

The NSF announced in mid-November that it would be decommissioning the telescope after two major cables had become unattached, and it was determined that the structure was too insecure for construction workers to safely stabilize the site.

The decades-old telescope was considered iconic by the scientific community and had even been featured in the 1995 James Bond spy film “GoldenEye.” At present, officials have not considered a replacement for the telescope, which was the second-largest of its kind.

Image of a Giant Asteroid Flying Towards Earth at 8.7 Km/s Released by Arecibo Observatory