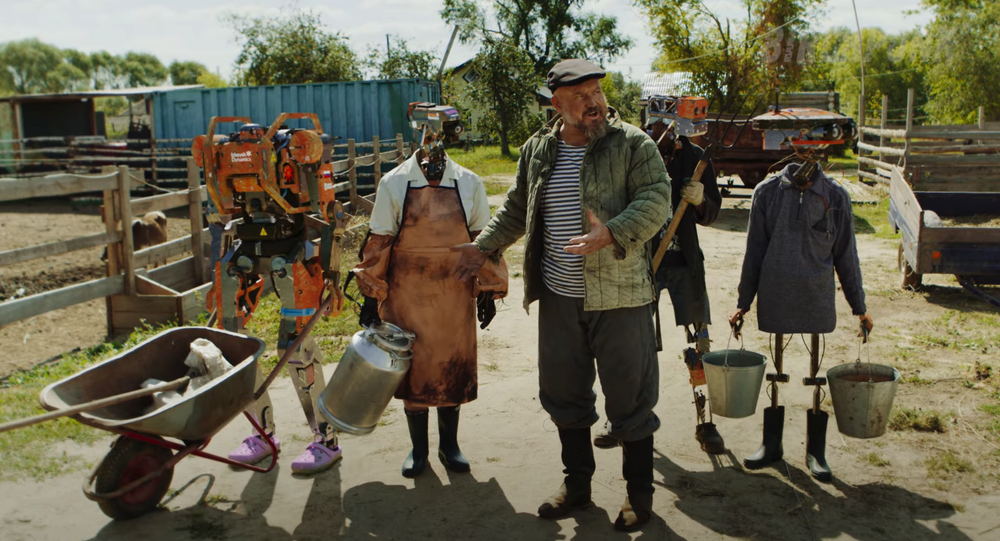 The video, featuring a creative blend of contemporary Russian rural life and futuristic technology, has received nearly two million views on YouTube in less than 48 hours.

‘Russian Cyberpunk Farm’, a new viral short film by previously unheard-of YouTube channel birch punk, has been doing the rounds on the worldwide web, collecting views, likes and comments in the hundreds of thousands.

Narrated in a mixture of Russian and English, the short film is centered around Nikolai, a farmer from Ryazan County who shows viewers around his "cyberpunk farm", which includes imagery of Russian farm life spliced with androids from “Izhevsk Dynamics Corporation,” hoverpad cars, flying Russian Post train cars, nuclear-powered Belarus tractors, and “fractal cucumber” vegetables.

The finale of the video reveals that the farm is actually a piece of terraformed land situated inside a crater on Mars.

Released on Thursday, the clip has already received nearly two million views on YouTube, and been shared across platforms ranging from Russian social networking site VKontakte to Instagram, Facebook and Twitter, and raved about by a host of Russian media outlets.

Even Russian Space Agency chief Dmitry Rogozin, whose face made a brief cameo in the clip on a poster featuring the tagline "We’ll make the Red Planet Green", praised creators’ talent.

“It has the right slogan. Or more precisely, two slogans, including the one under my portrait…The thesis of Russia’s expansion into space and the creation of a favourable environment for supporting human expeditions to other planets corresponds to our understanding of our goals and tasks. Therefore, this clever video is precisely about the Russian character – paradoxically combining a craving for modern technology and the preservation of the medieval way of life in the countryside,” Rogozin said.

The clip was written and directed by Sergei Vasilyev, who told Russian media that his only real wish was to make an entertaining video, and said that he came up with the idea after visiting a farm. Vasilyev said the clip was an enthusiastic project made free of charge. He added that he hopes to make more, similar short films in the future.