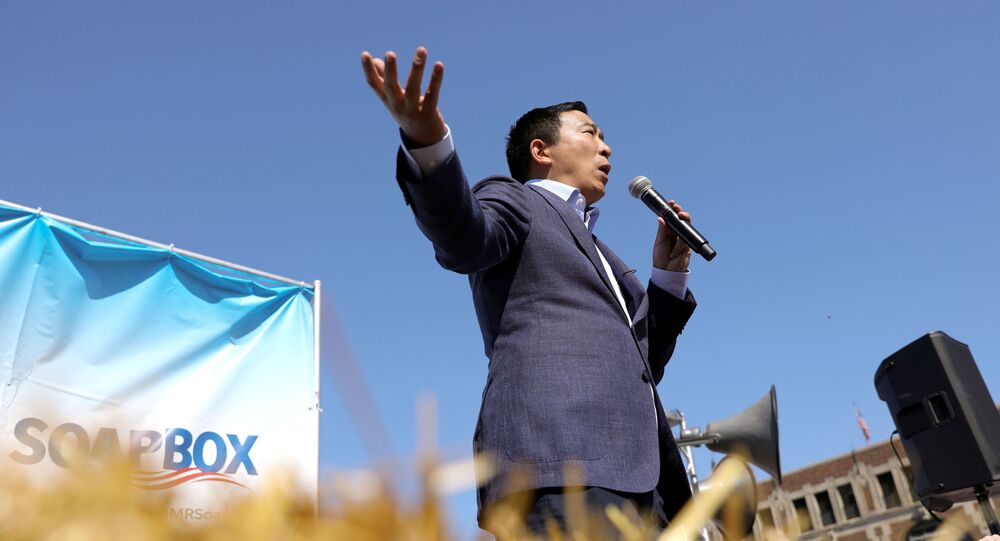 The 44-year-old presidential hopeful, tech entrepreneur and lawyer is currently polling between 2-3 percent in a crowded field ahead of the Democratic primaries.

Democratic presidential candidate Andrew Yang has garnered attention online after calling himself President Donald Trump’s “kryptonite” and saying the president has yet to attack him online because he is afraid.

“[Trump] even said in a rally in West Virginia a number of months ago, he said he can’t wait to run against the Democrats. The only thing he’s worried about is that some new figure comes out of nowhere, and I’m that figure,” Yang insisted.

“He runs effectively against people that are part of the DC establishment, and I am not,” he added.

Describing Trump as “a bully,” Yang said the president hasn’t yet tried his insults out on him because “he knows I’m better at the internet than he is.”

Yang’s comments on being Trump’s “kryptonite” were just too much for some social media users, who pointed to his low polling numbers and asked whether the president even knows “who the f this dude is.”

Andrew Yang isn't anyone's kryptonite. Over exaggerating 2%. Promise everything. Deliver Nothing. There are not enough funds if we gave 100% of our paychecks to taxes to pay for what the @DNC fraudulaters are promising the voters. https://t.co/9GM9OxvfVN

Does Trump even know who the f this dude is?

“The only thing I worry about is that some total unknown that nobody ever heard of comes along.”

Trump supporters, meanwhile, pointed out that if Yang was “kryptonite,” that means the president “is in fact Superman.”

😂😂😂Whatever goofball. At least he acknowledged that Trump is in fact Superman...😉

Yang supporters came out to defend their candidate, saying he was not only Trump’s kryptonite, but his opposite – “an Asian man who likes #MATH.” The #TrumpFearsYang hashtag became the number one trending hashtag on Twitter on Saturday. But the president has yet to mention Yang in any of his tweets.

#TrumpFearsYang because Yang is an outsider and will take Trump to the cleaners in just about every context . Yang is his kryptonite and opposite - an Asian man who likes #MATH 🥊🇺🇲

Anyone disagreeing with this should take a peek at the comments section of any of Yang's long-form interviews with a conservative host. Half of them are, "I'm a lifelong conservative and this might be the first Democrat I vote for."

He's the only Dem who appeals to both sides.

Yang has previously been described as ”the left’s Donald Trump,” and has promised to defeat Democratic establishment candidates and Bernie supporters while luring Trump voters. According to aggregate polling data published by RealClearPolitics.com, Yang is polling at an average of 2.6 percent in polls from the past two weeks or so.