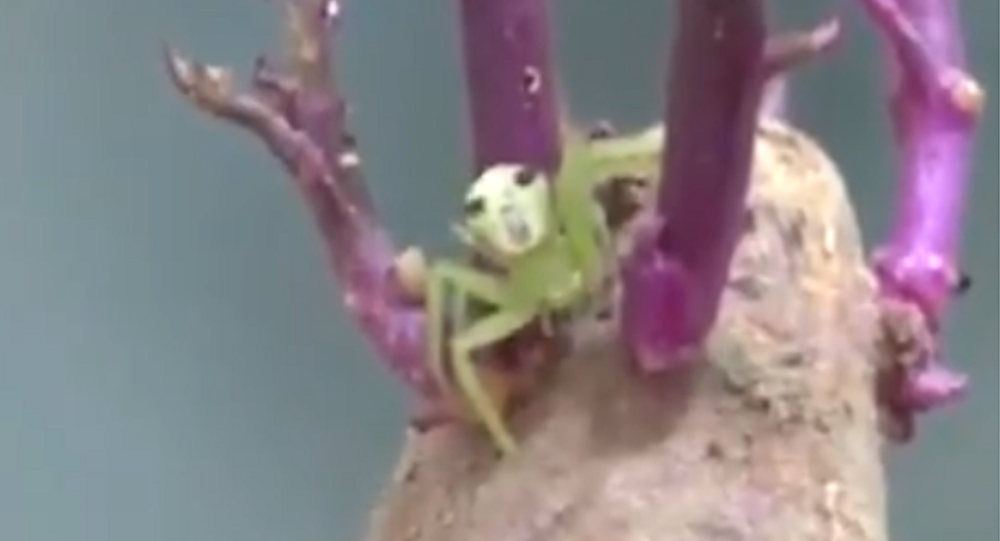 The video featuring the creepy crawly, spotted chilling in a potted potato plant in a home in southern China, has spread like wildfire, with users comparing it to expressionist paintings and asking whether it was the result of genetic experiments.

China’s People’s Daily has released footage of a small green spider with a human-like face painted across its rear, with the ‘face’ complete with eyes, a nose, a smiling mouth, eyebrows, and even what looks like a receding hairline.

Has spiderman been found? This spider with a humanlike face on its back was found at a home in C China's Hunan and has gone viral on Chinese social media. Do you know its species? pic.twitter.com/0iU6qaEheS

The video received tens of thousands of hits on Twitter, and spreading quickly to other platforms; it was filmed by a woman named Li at her home in Yuangjiang, a city in China’s Hunan province.

The footage has intrigued users, one of whom compared the face to that in Norwegian expressionist artist Edvard Munch’s famous painting ‘The Scream’, with other warning that it could be Spiderman’s arch nemesis Venom, or joking that this was a case for the FBI’s Alien Department.

This not Spiderman , this is VENOM

One user asked if the footage indicated that spiders were “mutating.” “It’s like something sneaked out of Area 51,” another wrote.

One helpful user appeared to solve the mystery, saying the spider looked like a “harmless thomisid” known as ebrechtella tricuspidata, a species of crab spiders living across wide swathes of Asia, Russia, the Caucasus, Turkey and Europe, and typically inhabiting meadows and the edges of forests in search of prey.

A few Spider-Man nerds got sidetracked, however, starting a debate about whether it was appropriate to label the arachnid a true spider man.

Thousands of Them! Baby Wolf Spiders Fall Off Their Mother

A Trashy Invasion: Thousands of Spiders Gather on Trash Can, Get Knocked Off