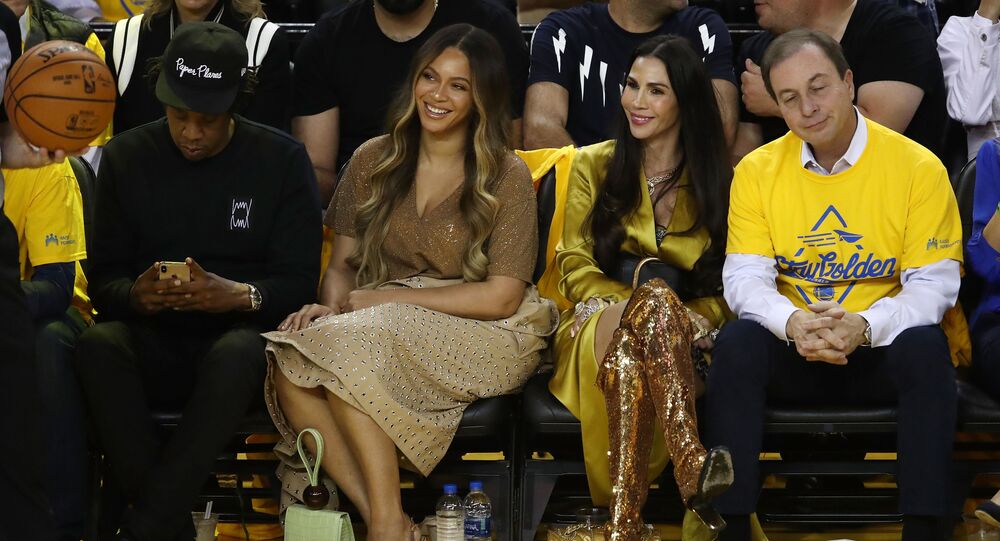 The Carters made a sensational appearance at Game Three of the NBA Finals in Oakland to watch the Golden State Warriors face off against Drake’s beloved Toronto Raptors. Not only did the game appear to be unlucky for the Warriors, but it also left a somewhat negative imprint on the team’s owner’s wife.

Nicole Curran, the wife of Golden State Warriors owner Joe Lacob, has been receiving tonnes of death threats on social media over a viral video showing her leaning over a seemingly annoyed Beyoncé to speak with Jay-Z, Daily Mail reported.

“I have been cyber bullied and I think it is very unfair. They were our guests last night. As a hostess, I offered her a drink and then him one as we don’t have floor service at our games. I had to lean in to hear what he wanted. That is it. No story. Just bullying”, she told the UK tabloid.

Just spoke to Nicole Curran, the wife of Warriors owner Joe Lacob, about the “incident “ with Beyoncé last night. She was in tears. Said she had been getting death threats on social media all night this morning she disabled her IG account just to make it stop.

The whole buzz around the “incident” came after ESPN shared a 13-second clip via Twitter showing Curran, who was sitting between the superstar and Lacob, leaning over Bey to chat with the singer’s husband, rapper Jay-Z, during Game 3 of the NBA Finals Wednesday night.

Jay-Z and Beyoncé are courtside for Game 3 😎 pic.twitter.com/6mmJuN8Odn

As the two were talking, the “Lemonade” singer, as many speculated, seemed to be annoyed and gave some epic side-eye in Nicole’s direction – something that has apparently been widely perceived by her rabid fans as a cue for them to act.

Even though Beyoncé is seen smiling and waving to her fans across the court, her beam quickly fades as Curran and Jay-Z continue talking, with the last few seconds of the clip showing her adjusting herself in her seat in a way that she gives Nicole a slight shoulder shove.

Curran said she had no idea anything was even amiss until she got home and started seeing texts from friends and checked her social media. She’s invited Jay Z and Beyoncé to the game 3-4 times before. Last night she says she asked if they wanted drinks. Beyoncé asked for water

Curran says Jay Z asked for a vodka soda. She asked if he wanted lime with that. But it was loud in Oracle and she couldn’t hear, so she leaned over. That’s where the photos of Beyoncé looking askance at her come from.

The now-infamous interaction has spawned a bunch of memes, including those alluding to the lyrics from her song, “Sorry”, off her visual album Lemonade, which focuses on Jay-Z’s being unfaithful to her: “He only want me when I’m not there/ He better call Becky with the good hair”.

When Becky’s trying to test your limits. #TheLimitDoesNotExist

Beyonce: “This Becky with the good hair bout to get her wig split” pic.twitter.com/1BpSWdYzNB

beyonce definitely didn’t think that tonight of all nights that she’d have to hit a woman with a shoulder nudge in rare burberry but here we are.

Many social media users have lashed out at the Carters and called on the couple to speak up for Curran:

Shame on Beyoncé and Jay Z if they don’t speak up for Nicole Curran. They can’t pretend as if they’re not aware of what’s happening. Big Shame.

@Beyonce Hey Bey, you might need to speak on what's happening with Nicole Curran because her comments section on insta was flooded with bee stings and she's been forced to turn off comments for all her posts. One can only imagine what her DMs look like. #BeyHive

Some jokingly suggested that Bey’s “Lemonade” Pt. 2 is on its way, and pointed out that she was visibly unhappy with that encounter:

Curran: “Do you want a lime with that?”
Beyoncé: “No, bitch but do you want some lemonade? I got a whole album for you.” https://t.co/7oPDJ2OPO2

beyoncé’s face when shorty leaned over to talk to jay 😂😂😂 pic.twitter.com/5PqIhCmgGy

Beyoncé don’t like that girl beside her at all.

The Carters, who have on numerous occasions been Curran’s and Lacob’s court-side guests prior to Wednesday’s game, are yet to comment on the online backlash.