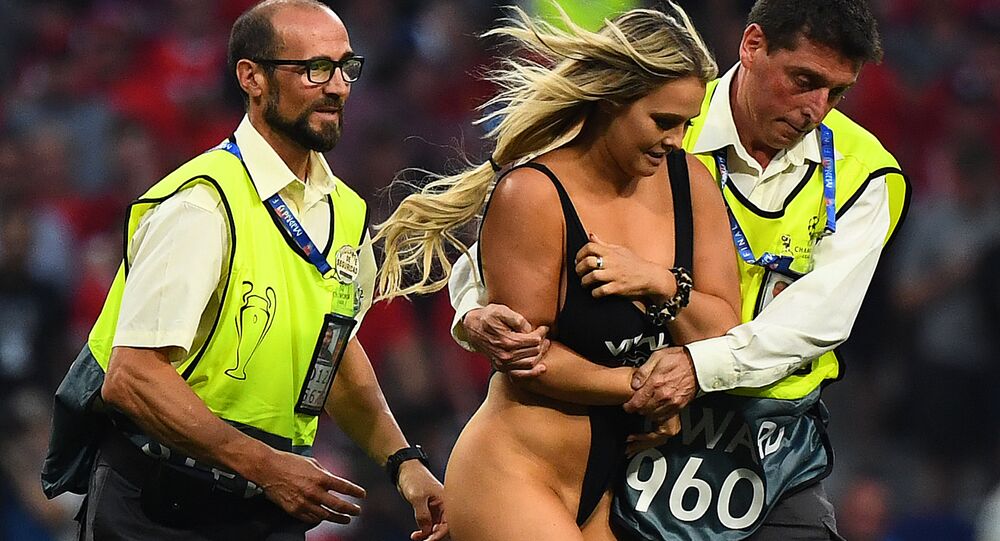 If you are an aficionado of neither Liverpool nor Tottenham, Saturday's Champions League final was arguably not as spectacular as you expected it to be, but there was at least one thing that could have sweetened the pill.

Between Mohammed Salah's second-minute goal from the penalty spot and a late second-half goal by Divock Origi, there was a lot of struggle but few clear chances, with Liverpool sitting deeper and Tottenham having problems in the attacking third.

And it perhaps speaks for itself that one of the highlights of the game had nothing to do with football.

Halfway through the first half, a curvaceous female trespasser invaded the Wanda Metropolitano pitch to interrupt the game for a minute. The woman was wearing nothing but a black swimsuit promoting an X-rated YouTube channel.

Wolanski has appeared in Sports Illustrated, FHM, Maxim and Jetset Magazine. This year, she featured in Slasher Party, a horror movie about a group of social media personalities targeted by a mysterious killer at a Hollywood mansion, which also starred Zdorovetskiy.

The latter was banned from visiting sporting events after he ran across the pitch at the 2014 World Cup final, where he had "natural born prankster" written on his chest and tried to kiss German defender Benedikt Howedes. On Saturday, the prankster was still able to make it to Wanda Metropolitano in disguise.

He appeared to have been thrilled to watch his girlfriend run onto the pitch. "I can't wait to marry you," he tweeted, putting an emoji of a wedding ring.

The stunt has apparently played into the hands of both Zdorovetskiy and his better half. Wolanski's Instagram audience skyrocketed from 230,000 to 2.3 million followers overnight. Meanwhile, according to sports business reporter Darren Rovell, Vitaly Uncensored gained almost $4 million in advertising thanks to her antics.

However, the model herself said she pulled off the stunt not for the sake of marketing, but simply for the fun of it. "Streaking the Champions League!" she wrote. "Life is for living, do crazy things that you will remember forever."

It seems that for some fans, her trespassing was an entertaining moment of an otherwise pretty uneventful game.

These are the highlights of the match:

With the Highlight of the final: Pitch Invader