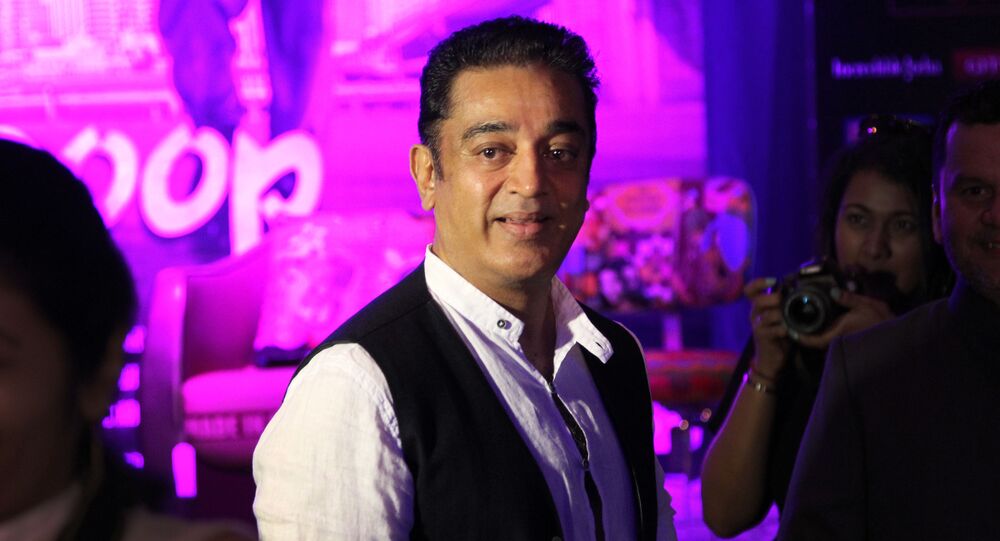 The actor’s controversial remark evoked a vociferous backlash on social media, especially from the Hindu community as well as others, including the leaders of the governing Bharatiya Janata Party.

New Delhi (Sputnik): Kamal Haasan, a popular Indian actor has become the target of trolls for having described Mahatma Gandhi's assassin as the first "Hindu terrorist" in independent India.

The actor who recently formed a political outfit in southern India was delivering a speech in a Muslim-dominated area recently when he made the controversial remark: "The first terrorist from independent India was a Hindu. His name was Nathuram Godse".

Makkal Needhi Maiam chief Kamal Haasan while campaigning for his candidate in Aravakurichi for the upcoming by-elections said that independent India's first terrorist was a Hindu and his name was Godse.@NairShilpa1308 with details. | #May23WithTimesNow pic.twitter.com/pNtSJB7a4W

Godse shot dead national leader and freedom fighter Mahatma Gandhi on 30 January 1948, a few months after India gained independence from British colonial rule in 1947. Godse believed Gandhi had been unfair to Hindus during India's partition and was responsible for the Hindu-Muslim riots that occurred subsequently.

Political leaders lambasted him for not understanding the difference between a terrorist and an assassin and for equating terrorism with Hinduism.

Bollywood Actor Vivek Oberoi accused him of playing to the galleries for votes and said, "You can say Godse was a terrorist, why would you specify ‘Hindu'? Is it because you were in a Muslim dominated area looking for votes?"

Dear Kamal sir, you are a great artist. Just like art has no religion, terror has no religion either! You can say Ghodse was a terrorist, why would you specify ‘Hindu’? Is it because you were in a Muslim dominated area looking for votes? @ikamalhaasan https://t.co/Hu3zxJjYNb

The Twitterati were also unforgiving in their comments about widely-acclaimed actor Haasan over his remark appearing to tarnish the entire Hindu community.

Beware.. @ikamalhaasan is really going to be poison. Did he ever talked about Muslim terrorism? Did he ever criticize any terrorist's attack? This 'Hindu terrorism' phrase is the new cheap trick, for these kind of "actors", to get minority's support

Also, Kamal sir doesn't even know the difference between a terrorist (who randomly kills innocent lives without any specific reason for killing them) and a assasinator (who kills ONLY his target for reasons he found fit)

Some netizens lambasted the actor-turned-politician saying that whatever image he had earned as an actor-artiste he had lost it completely.

@ikamalhaasan I know your Duplicity & Spoilt Secular Image, Today whatever Image that u earned as A Respect for An Artist these yrs, You have lost it Totally…. You Speak on Agendas not Dividing people…

We,தமிழ் ppl know Kamal is a swine of first order & a convert agent.
Now we understand he is unable to step out, cancelling 2 daysProgrm
Hindus are United to give a fitting reply.

All waiting for Thalaivar @rajinikanth a simple human. @SaffronDalit@Karthik_klt@VVR_KrishnaN pic.twitter.com/bhlGjURCff