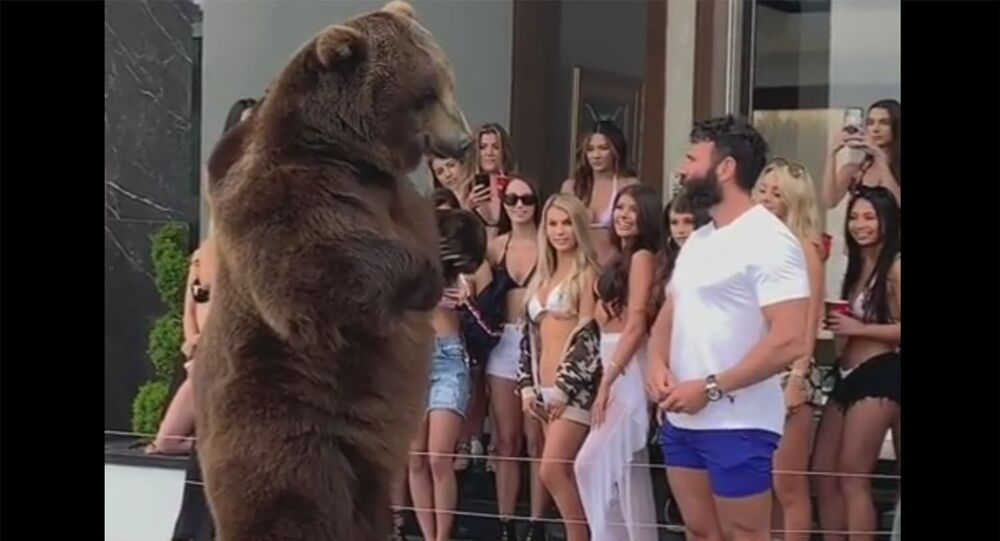 While animal rights organisation PETA has condemned the event, calling to “throw a book” at the party’s host, Bilzerian himself insisted that he’d never do anything to harm bears.

Dan Bilzerian, famous Armenian-American gambler and internet personality well-known for his lavish lifestyle, has apparently managed to steal the spotlight on social media with a video featuring him feeding a Kodiak bear while in front of an audience comprised of scantily-clad women.

At the time of this article’s publication, the video, which was recorded during an 20 April party held on "a day given to celebration the consumption of cannabis", as the Daily Star points out, was viewed over 15 million times.

At one point, the bear, who was standing on its hind legs, gets on all fours, prompting Dan to back off a bit.

The video has elicited a somewhat mixed response from the social media crowd, with some netizens describing the scene as “absolutely f*ckin awesome” and “epic”, while others remarked that Bilzerian apparently “thinks of animals the same way he thinks of women- here for his entertainment” or simply claimed that “this is not okay”.

© AP Photo / John Shearer
‘They Want to Try to Make an Example Out of Me': Azerbaijan Issues Arrest Warrant for ‘Instagram King' Dan Bilzerian
The newspaper also noted that PETA has condemned the event, claiming that Bilzerian didn’t obtain the proper permits for such a party, with the organisation’s Senior Vice President Lisa Lange stating the group “is calling on authorities to throw the book at scofflaw animal exhibitor Steve Martin and the man who hired him for this dangerous stunt".

Bilzerian himself, however, retorted that he’d never do anything to harm the bear and that it’s “pretty obvious” that he loves animals, the newspaper adds.