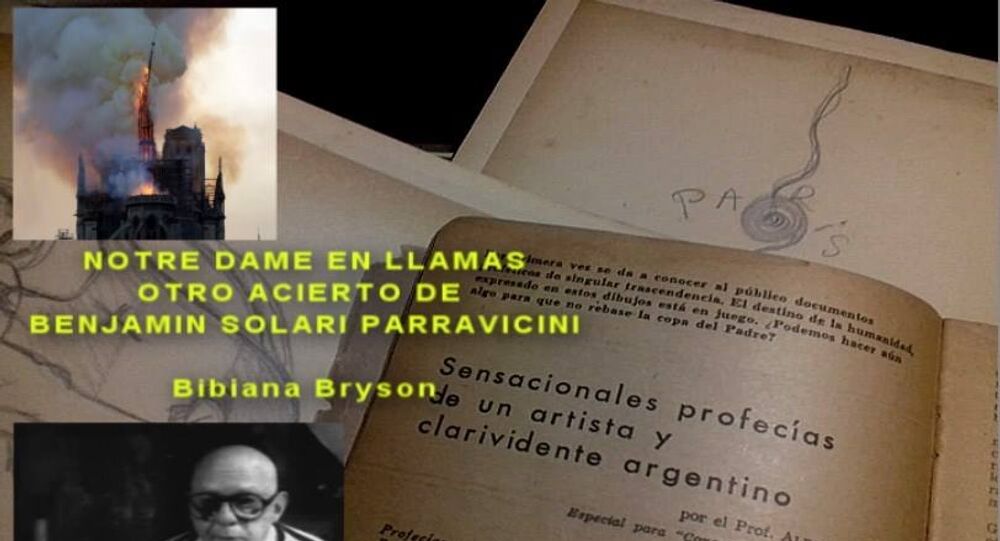 In one drawing from 1938, Parravicini, who died back in 1974, wrote: “Paris will be destroyed by huge fire.” It appears to show the River Seine – including the island on which Notre Dame stands – with the words Paris written around it. The letter r in is separated from the others, which Bryson believes could be significant.
READ MORE: Swedish Daily Lambasted for Drawing Hitler Into Notre Dame Blaze
She argues the r stands for relics – signifying the Crown of Thorns, a piece of the Cross and nails used in Jesus’ crucifixion, which are supposedly held in Notre Dame’s Treasury.
“It was obvious the intention was to indicate something of importance and to my surprise the relationship came up immediately in my mind. Although the text mentions the destruction of Paris by a great fire, we cannot affirm it must be literal… and more than one prophet predicts the destruction of the French capital by flames.What happened at Notre Dame could be more than an isolated disaster, it could indicate more terrible events to come,” she wrote.
Bryson also claims she can see the shape of the cathedral spire, at the point it was about to collapse.
Parravicini, who claimed to have predicted World War I, was obsessed with angels, fairies and spirits since childhood and, while he was serving as director of the Exhibition Gallery of the Municipality of Buenos Aires.
The Notre Dame fire brought attention of many researchers and conspiracy theorists all over the world. Shortly after a catastrophic fire ravaged Notre Dame de Paris, speculation emerged that this event had been foreseen by perhaps the world's most famous prognosticator — Nostradamus, a 16th century French astrologer and physician.
...
Reddit
Google+
Blogger
Pinterest
StumbleUpon
Telegram
WhatsApp
34