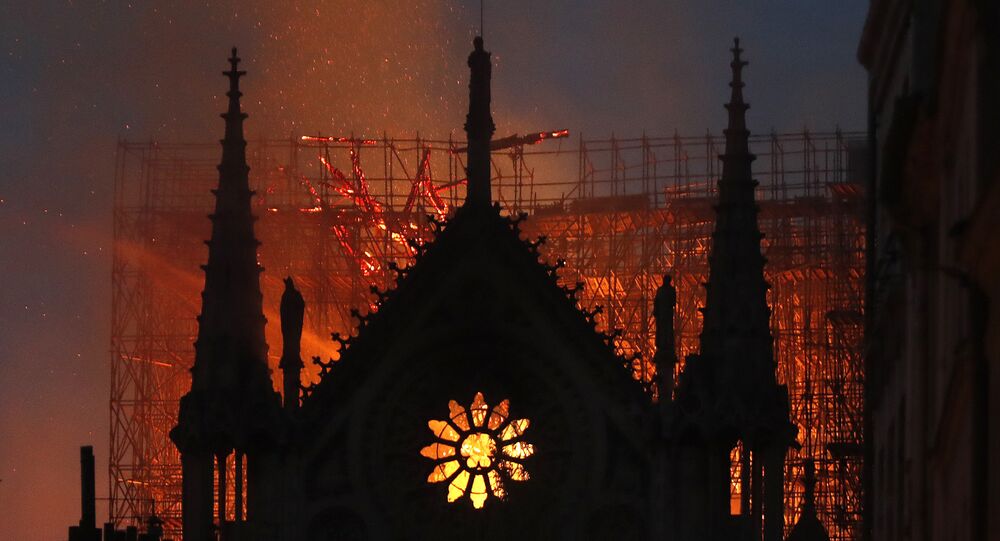 Modern-day supporters of Nostradamus's self-styled prophecies believe that he foresaw the Great Fire of London in 1666, the death of Henry II and the rise of Adolf Hitler. However, scholars point out that his prophecies are worded in a way that enables readers to interpret them through the lens of their own expectations and biases.

Shortly after a catastrophic fire ravaged Notre Dame de Paris, speculation emerged that this event had been foreseen by perhaps the world's most famous prognosticator.

Nostradamus, a 16th century French astrologer and physician, compiled a book of quatrains (verses) that allegedly predicted future events. They were divided into 100 sections called Centuries and made up the book Les Prophéties (The Prophecies).

Most of these so-called prophecies are vaguely-worded and open to a reader's interpretation; some verses have been attributed to different events that took place centuries apart.

Adams cites one prediction, found in the 1999 book The Complete Prophecies of Nostradamus, which she says is connected with the Notre Dame incident. It is translated as follows:

"The head of Aries, Jupiter and Saturn,
God eternal, what changes can be expected?
Following a long century, evil will return
France and Italy, what emotions will you undergo?"

She claims that the placement of planets and zodiac signs on the astrological chart for 15 April 2019 matches what happened on Monday.

"What we have here is Chiron indeed at ‘the head of Aries' at just three degrees of the zodiac sign. The sun, burning orange at sunset in Paris as Notre Dame fell, is also in Aries, in this astrological chart set for Monday 15 April 2019 at 5:50 p.m., Paris, France," she writes.

"The shock of the moment is shown by Uranus at 2 Taurus, making an almost exact semi-sextile to Chiron. In fact, this is a line-up which could only happen once every 80 years. The Moon is at 3 Virgo, exactly quincunx Chiron."

"What is Chiron? A symbol of people and organisations which are audacious. Outrageous. Which get away with the so-called impossible. In a moment I will look at WikiLeaks, Julian Assange and a well-known Syria Files post from them, some years ago, called The Notre Dame Prophecy. Yes, you did read that right. The Notre Dame Prophecy."

© Sputnik /
'Why Not Trump or Russians?' Swedish Daily Lambasted for Drawing Hitler Into Notre Dame Blaze

As firefighters were battling with the blaze, French President Emmanuel Macron issued a statement.

"Notre-Dame is engulfed in flames," he said. "Emotion of the whole nation. Thoughts are with Catholics and all the French. Like all citizens, I am sad to see this part of us burn."

Adams believes this is another evidence that Nostradamus' verse was referring to the cathedral, as the word ‘emotion' appears in the fourth line, while part of the president's first name  — which is translated from Hebrew as ‘God with us' — appears in the second line.

Incidentally, the Notre Dame fire broke out during Holy Week and came at a time when the Catholic Church has been rocked by a widening sexual abuse scandal.

Last week, Pope Benedict XVI blamed sexual abuse in the clergy on the "all-out sexual freedom" of the 1960s; some scaremongers say this could be a sing of the end times.

Devasted about Notre Dame for cultural and art historical reasons. My super Catholic mom called me saying how worried she is that it’s happening during Holy Week and that it’s a sign of the end times and Nostradamus must have predicted it and I’m like….mmm that ain’t it

#familyvalues
Sign of the times. Notre Dame on fire. Reflects what France and Europe are fundamentally doing wrong. pic.twitter.com/WPU9Fw8hud

Notre Dame burning down is a sign of the end times according to Nostradamus isn’t it? https://t.co/BdUJA2bqVY

The burning of #NotreDame de Paris is another sign that we are living in the end of times.The book of Revelation foretold the topography of Israel will one day be altered beyond recognition. I would not be surprised if more venerable buildings (or whole cities) will lie in ruins. pic.twitter.com/6H9EuM8WG6

Although the devastating fire dealt heavy damage to the cathedral's exterior, toppling its spire and making the roof collapse, some of the interior appeared to remain intact. The altar and altar cross were preserved, for instance, and some commenters called it a "sign from God".

Amid the charred rubble of Notre Dame Cathedral, the cross still stands, unburned, as a symbol of hope and resurrection. If that isn’t a poignant sign during Easter Week, I don’t know what is. pic.twitter.com/CyCa7tuM9Q

maybe Notre Dame Cathedral in Paris burning during Holy Week should be a sign that the Catholic Church should stop sexually abusing children? #NotreDameFire

It also emerged on Monday that a small fire broke out inside al-Aqsa mosque in Jerusalem at the same time the mammoth fire engulfed Notre Dame. However, the blaze in the Jerusalem mosque, one of the holiest sites in Islam, was swiftly put out.

so notre dame was on fire and al-aqsa mosque which is one of the three holiest mosques was also on fire at the same time, if thats not a sign then idk what is