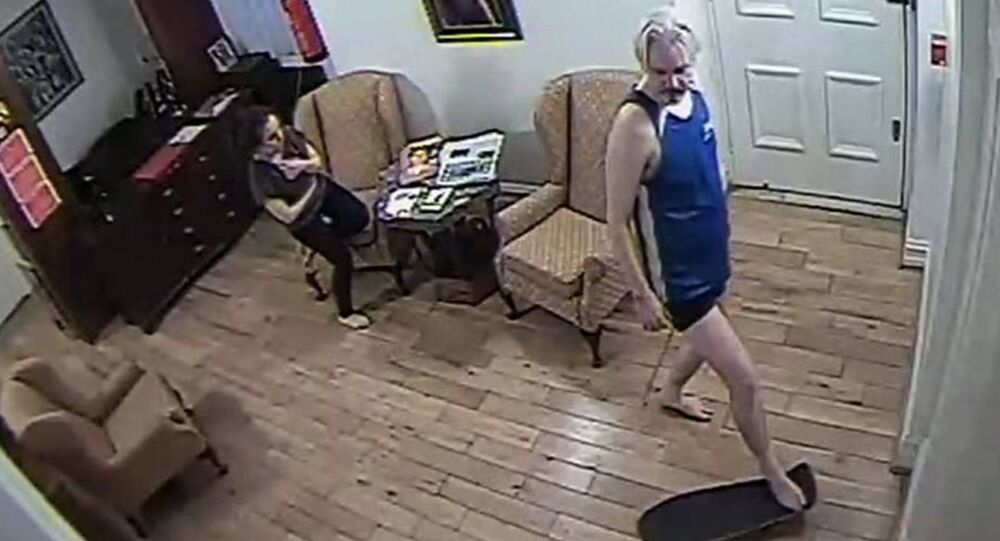 WikiLeaks founder Julian Assange was arrested in the Ecuadorian Embassy in London on 11 April and was later charged for skipping bail by Westminster Magistrates Court.

El Pais has published footage from security cameras of the WikiLeaks founder skateboarding in the Ecuadorian Embassy wearing in shorts. This allegedly confirms reports about surveillance devices that were found inside and outside the embassy.

Assange had been residing in the Ecuadorian Embassy in London since 2012 for fear of being extradited to Sweden on sexual abuse allegations.

On 10 April it became known that Assange was being spied on in the embassy, according to WikiLeaks' chief editor.

Note. Ecuador had given Assange asylum to protect him pic.twitter.com/GhnQxOt8qU

​READ MORE: Assange to Fight in UK Because He Prefers to Be Tried There — Journo

According to reports, the embassy staff complained that Assange was riding a skateboard in the polished wooden halls, playing football, and being generally untidy.

The life of Assange, told by his guards at the Ecuadorian Embassy & his skateboard. El Pais today. pic.twitter.com/s19UaFEDKF

Assange was detained in the Ecuadorian Embassy in London after Quito revoked the asylum status that it had granted the WikiLeaks founder. Assange could possibly be extradited to the United States, where he is wanted for "conspiracy to commit computer intrusion for agreeing to break a password to a classified US government computer".