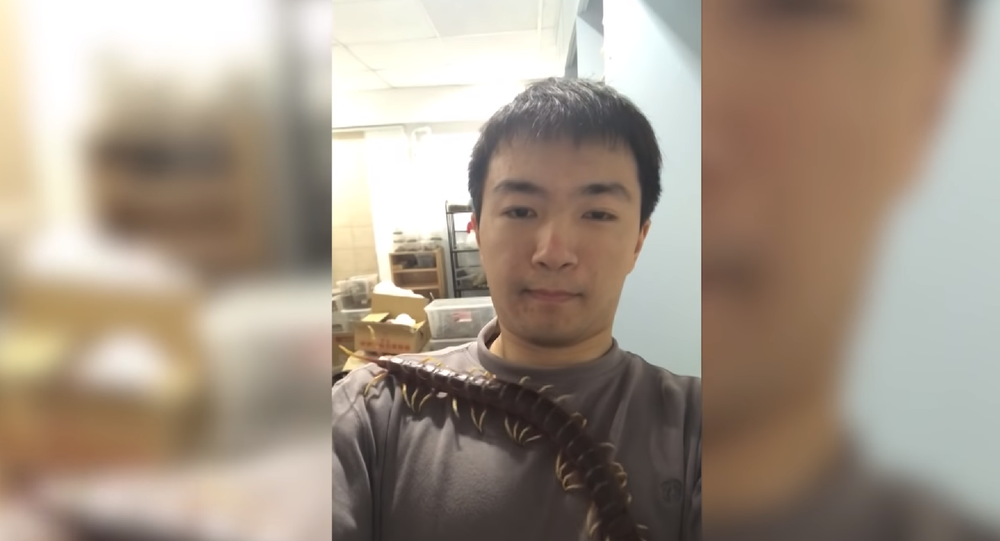 A biology student in Taiwan has posted photos and video of his Peruvian giant centipede crawling all over his body. The student says he’s not afraid she’ll bite - but if she did, the 17- inch-long arthropod could deal some real damage: its venom can subdue prey 15 times its size.

Neil Cheng Le, 26, adopted the exotic creepy crawler when it was much smaller, but even though the critter is only (only!) supposed to reach 12 inches in length, this one has ballooned to an impressive 17 inches from head to tail.

It's not terribly unusual to keep an exotic pet like the centipede, which hails from the Amazon River basin. What is unusual, however, is to let the venomous beast crawl all over you.

© CC0 / Pixabay
Video of 'Alien' Insect Will Leave You Sleepless for Days
"There's definitely a risk handling venomous insects and it should be left to those with experience," Le said, according to the Daily Mail. "Their bite can definitely be painful but I never feel unsafe as I'm an experienced arthropod hobbyist. I have no problem letting her crawl over me and hand feeding her."

"My roommate is just as crazy as me, he has his own venomous pets. She has always been very gentle and easy to handle," the student noted. "However you need the right experience and knowledge to keep them healthy."

A Taiwanese man who lets his giant venomous centipede crawl over his body has warned his exotic choice of pet is not for everyone. Posted by Abdul pic.twitter.com/czDUC3X22G

​If the creature did bite Le, it would latch on to him with its huge pincer-like claws, injecting venom that causes agonizing pain, a blistering rash, nausea and fever, the Mail noted.

Studies have proven the critter can down prey 15 times its size. Scientists in China last year found that a 3-gram Chinese red-headed centipede could kill a 45-gram mouse in under 30 seconds because it, like all centipedes, uses a special kind of peptide toxin that goes straight for the nervous system.

The website Petbugs.com warns that Peruvian giant centipedes "are fast and aggressive" and that "adults will consume almost any creature that is not larger that itself, including large crickets, cockroaches, small mice, and even fuzzy rats."

Further, the website warns that, "although most people would not die from this species, some people may be allergic to the venom, or just more sensitive, making it a dangerous situation. This is one of the reasons that people should not handle this centipede. Effects of this centipedes' natural defenses may vary between people. All centipedes should be considered dangerous, so be careful, because you don't want to find out if you are allergic or more sensitive the HARD WAY!"

One of its kind has killed at least one human before: a four-year-old girl in Venezuela in 2014, El Tiempo reported.