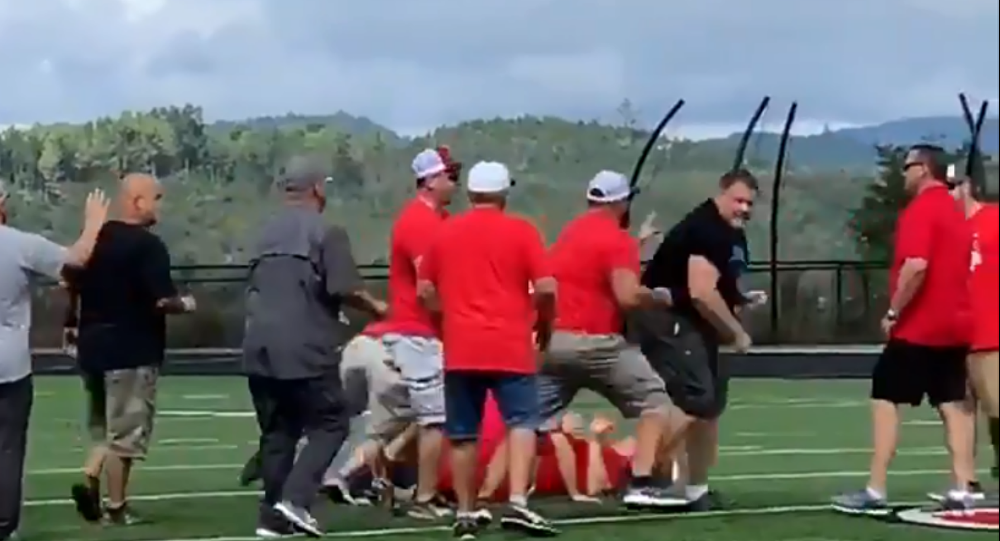 Postgame handshakes between coaches at a Pee Wee football game in Wise, Virginia, turned into a street brawl on Saturday after heated words were exchanged on the field.

The incident, which took place at Wise Central High School, occurred moments after players from Dickenson County's Ridgeview area and Wise County shook hands, Yahoo Sports reported. But when the coaches came around to perform the same post-game ritual, a man in black exchanged words with an opposing coach sporting red — and it was go time.

​As if a bell had been rung to signal the start of a boxing match, punches were quickly thrown as the still-suited-up players began shrieking in fear. After the first few blows are delivered by members of the warring coach staffs, one man is seen tumbling onto the ground before others move to pick him up.

The 51-second brawl was eventually called to an end after concerned game viewers flocked to the field.

"It was pitiful to see the kids crying and scared, [and] these are their coaches and mentors and guys they look up to," a parent who attended the event told News 5. "I hope it all gets resolved and doesn't happen again."

Surprisingly, no injuries were reported nor arrests made after local police were called to the scene, Virginia station WCYB reported. No charges have been filed.

It is still unclear what exactly was said that triggered the fight.

This latest incident occurred just a week after a parent was filmed body-slamming a referee at a youth football game between teams Rio Grande and Atrisco Heritage in Albuquerque, New Mexico.

​According to Albuquerque news station KRQE, that brawl began after a player from Rio Grande complained to the referee about a call that was made. After a bit of pushing between the two, the parent of said player then ran onto the field and dealt with the issue in his own way. As a result of the fight, the New Mexico Young America Football League banned the Rio Grande team for the remainder of the season.