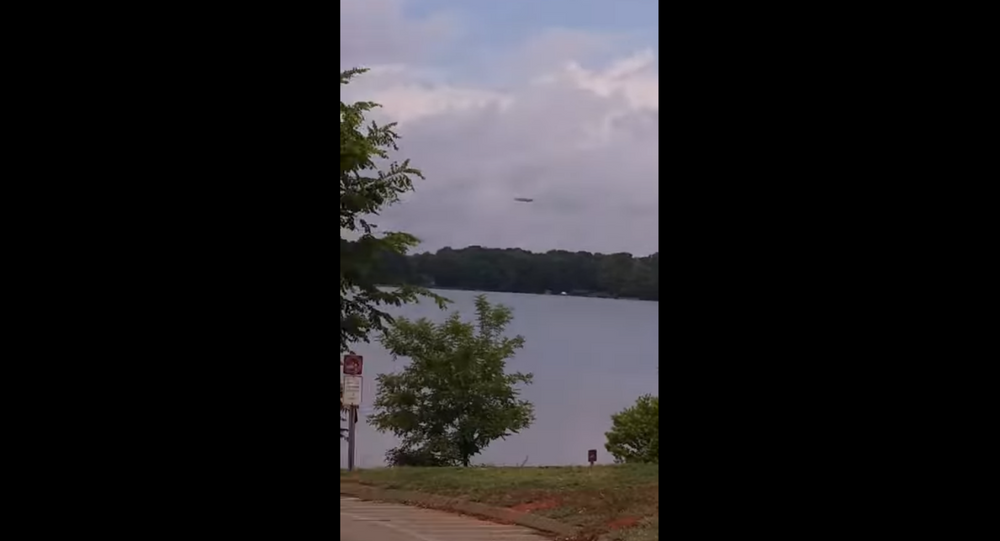 A video showing a mysterious unidentified flying object hovering above some trees near Lake Norman, North Carolina, earlier this year is sparking talk of alien life on Earth.

The video, which was originally published via YouTube by Jason Swing on May 29, saw an uptick in viewers after it caught the attention of fellow channel "The Hidden Underbelly 2.0."

In the recording, Swing announces he's seen a "spacecraft," before panning his camera over to a blimp-like object flying near the lake.

​According to Swing, the incident took place early in the day while he was working. "It had been raining all morning. Rain finally stopped, so we went [to] pick up a boat from Lake Norman… When [I] came around the corner I saw this thing sitting still very close," he wrote in the video post.

In the days since the video went viral, commenters haven't exactly been kind to Swing, with many trash talking his shaky film work. One user even went as far as suggesting that he opted to record the incident "while jumping on a Pogostick."

"So annoying that people can't film properly. I get that they are scared, but this is a once in a lifetime opportunity," commenter Tom Brown wrote. "A line in the sky can't be that scary. [It] wasn't moving or flashing lights [and] there was no indication that it was alien and not some kind of craft made by humans. Who knows. Wish people would film things properly these days. It's 2018 and we can't even get a good UFO video. Ah well until we get true disclosure nothing will ever change.﻿"

Others shot down Swing's claim, saying that the object was just a regular ol' plane.

"Nope. Just a passenger jet coming out of Charlotte Douglas Airport. Flying low (below the cloud deck) on northbound track from airport," viewer Joe Browder wrote. "See this all the time up there. Look at the tops of the trees and bushes each time the video shows the plane and you see that it is steadily moving left to right. Going to look like hovering and slow movement since it is about 4 miles away.﻿'

According to the Charlotte Observer, the object could easily be the Goodyear Blimp, which was in the Charlotte area for NASCAR's Coca Cola 600 in May.

​Swing's footage follows news that a shipwreck explorer reportedly discovered evidence in the Bermuda Triangle that supports claims of alien life on Earth.

While what Swing's object might've been is still unclear, it's certain that netizens want the amateur documentors of strange phenomena to do better work.