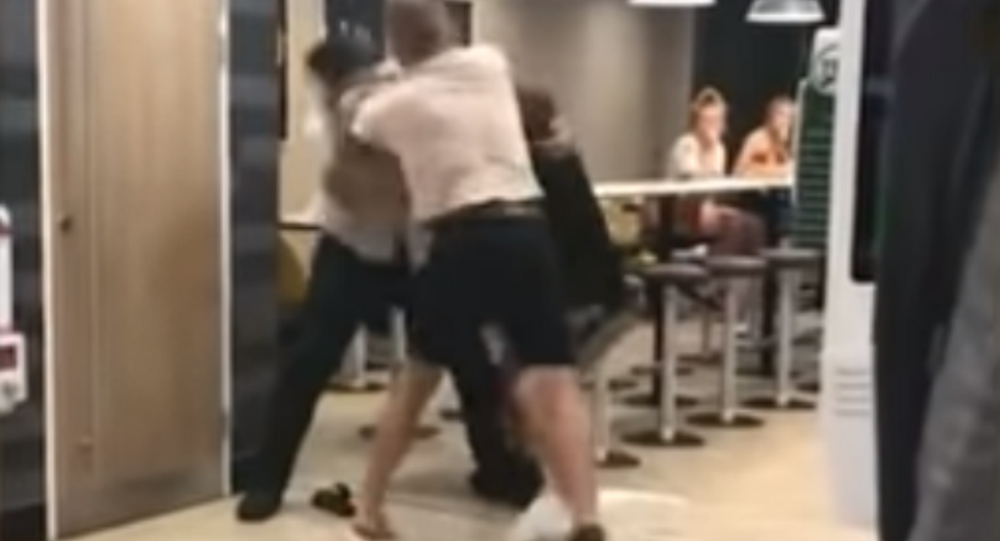 Diners at a McDonald's in Boston, Lincolnshire, were in for a shock on Tuesday when two teenagers suddenly began to attack an employee when they were asked to leave.

Footage shared on social media shows the two customers repeatedly punching and grappling with the employee as several diners simply look on. At one point, as the worker is picking himself off the ground, one of his attackers smacks him in the head.

​The attacks continue, despite another employee imploring people to intervene. "Can anyone help please?" she's heard yelling from behind the counter.

"Out! Get out now!" the employee involved in the scuffle yells. "Get out!"

Although the recording appears to show the pair settling down and agreeing to leave, one eyewitness told local outlet Lincolnshire Live that this was just one of three attacks dealt to the staff member. The final round took place outside the establishment and involved one of the teens reportedly hitting the employee with a metal object ripped from a McDonald's door.

"The young lads wanted a fight from the beginning — they were being really stupid and were shouting and swearing at the workers," one person told the publication. "The two lads were who were fighting were drunk."

According to the bystander, the brawl began after one of the teens reportedly tried to lock another staff member in the toilets. "The manager told a member of staff to go over and tell them to leave, and then it all just went off."

In a statement shared with the Daily Mail, the mother of the two teens said that she was "very sorry on behalf of my boys."

"I know what had happened and it is not acceptable, I'm very sad and ashamed that my boys would do this," she wrote. "They will be dealt with as will the situation. These sort of things happen everyday and all get to easily forgotten, but never do you think it's going to be something to do with your family."

Although police were called to the restaurant, by the time they arrived to the scene, the attackers had already left the grounds and were nowhere to be found. The Independent reported that officials are still searching for the pair.

Car Rams Into McDonald's in Latvian Capital of Riga (PHOTO)