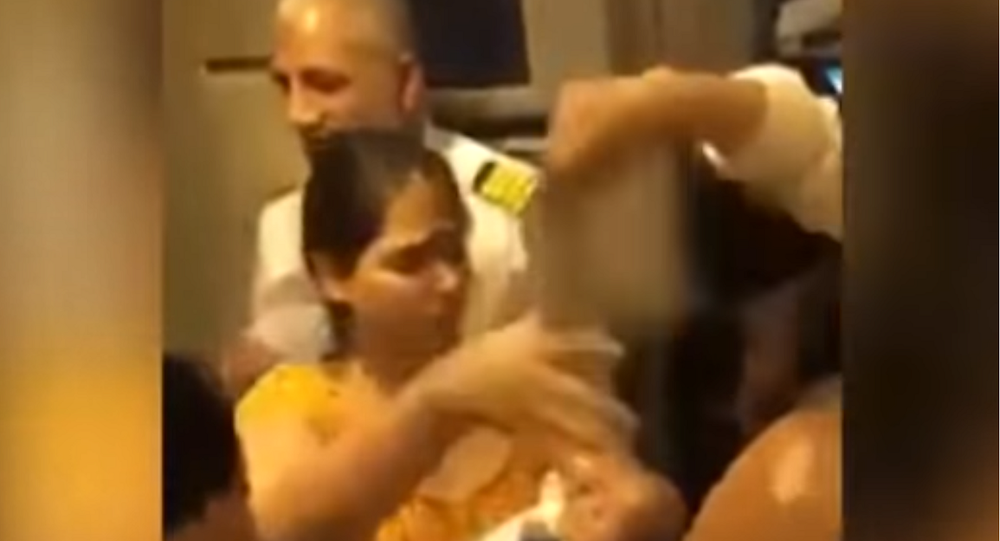 WATCH: Mother Pleads for Plane Doors to Be Opened as Baby Passes Out from Heat

A video recorded August 3 on a Pakistan International Airlines (PIA) flight shows a mother pleading with airline staff to open the plane’s doors after her infant child lost consciousness due to the heat. The plane reportedly sat on the tarmac for two hours with a failed air conditioner.

The video, which quickly went viral on social media as well as Pakistani TV, shows a woman screaming at officials in front of a plane door while a man holds her unconscious baby and others fan the child and berate the staff for not helping the situation. One official tells the woman to wait, while another is heard saying in Urdu, "[sic] would have opened the door… [we are] talking to the pilot," Pakistani news outlet Dawn reported.

Others on board the plane, which was due to fly from Paris to Islamabad, can be heard chanting in English: "shame, shame!"

The woman and her child later returned to her seat, the NY Post reported, noting the baby was unharmed.

PIA spokesperson Mashood Tajwar told Dawn Wednesday that "PIA has taken notice of the video and has launched an investigation to find out which flight and crew members are shown in the video."

"Some people on the media are reporting that the incident took place on August 1, some are saying on August 3 — we have yet to confirm exactly which flight and date it was," Tajwar said, while noting there was no official complaint about the incident.

A press release Wednesday evening on PIA's official Facebook page offered more details, noting that President and CEO Musharraf Rasool Cyan "has ordered an inquiry to ascertain the cause and to take corrective action accordingly."

The press release, along with other statements on the airline's Facebook and Twitter pages, assert that the plane was only delayed by 30 minutes, not two hours, and that "The aircraft doors were closed, and it was ready for push back, however clearance from Air Traffic Control was not given, and hence the aircraft engines could not be started, as it was still parked at the jetty. Also the doors could not be opened as it would have been a severe safety violation."

The statement further noted that PIA is in touch with the family of the mother and child and that "explanation notices have been given to the Captain in Command, Ground Handler at Paris Airport and the airline's Chief Operating Officer."

"Zero Tolerance Policy is being adopted in PIA, and there shall be no compromise on customer convenience and comfort and flight safety. Strict disciplinary action will be taken against the those found guilty of causing inconvenience to the passengers of said flight."

In a Thursday update on Facebook, PIA said, "We are very happy to share that mummy and baby from flight PK750 are doing well." The post noted that PIA's Rawalpindi & Islamabad district manager had met with the family and also called to find out about their welfare. The update concluded with the hashtag #PIAcares.