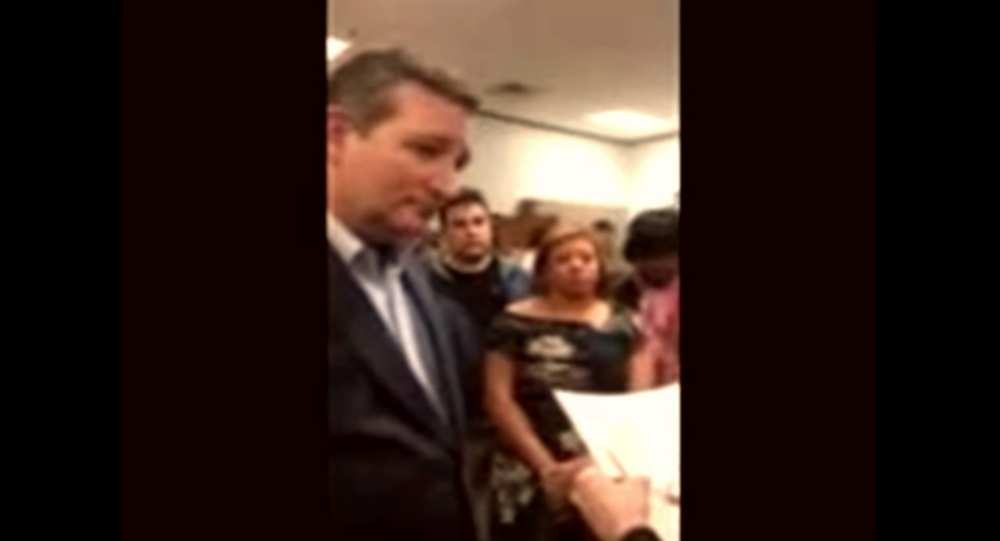 Attending Cruz's Tuesday campaign event, Texan Tammy Talpas approached the 47-year-old and introduced herself as "a woman over 50 who has seven active pre-existing conditions."

​"I'm not counting being female and a survivor of abuse," she noted. "I purchase my individual policy on the Health Insurance Exchange. If you force me into a high-risk pool, you will either bankrupt me or kill me. I take your threats of medical aggression personally and seriously; and I can assure you, I'm not the only Texan who does."

And that's when Talpas offered the world yet another reason to raise eyebrows over Cruz.

"My question is: Will you pledge to submit to a DNA test, to prove that you're human?" she asked the tieless politician.

Scoffing at the question, Cruz responded by saying, "Well, ma'am, thank you for that. One of the great things about our democratic system is that we can treat each other with respect and civility."

When Talpas asked for clarification on whether he would submit his DNA for testing, Cruz shut it down.

"Ma'am, if you want to engage in insults, that's your prerogative, but I'm not going to reciprocate. Thank you for being here," he said before walking away.

Talpas' request comes days after Cruz was duped into snapping a picture with another constituent who was wearing a lanyard that mocked him.

The trickster later noted on Twitter that she'd managed to get the photo by unbuttoning her jacket just seconds before taking the picture.

Cruz, who recently kicked off his re-election bid in The Lone Star State, has repeatedly faced backlash over his critiques of the Affordable Care Act and for his role in forcing a 2013 government shutdown to repeal Obamacare.

As for another popular theory about Cruz, whether or not he is the Zodiac Killer, remains to be uncovered.