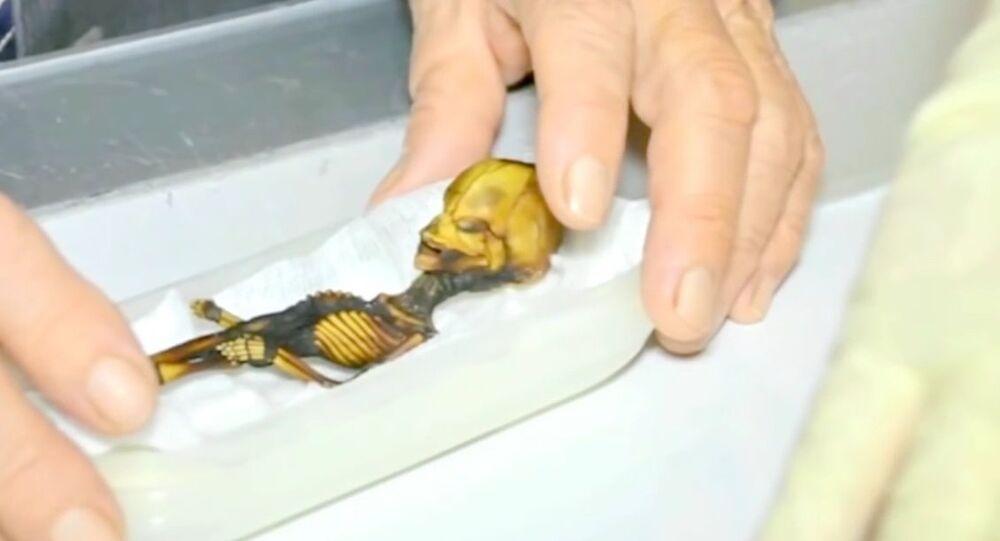 Fifteen years ago Chile’s Atacama Desert witnessed the discovery of an extraordinarily tiny mummified skeleton, which looked like an alien. Now, the mystery of its origin has finally been unraveled.

Scientists from California have retrieved DNA from the six-inch-long mummy’s bones, which helped reveal the real story behind the humanoid found in a ghost town. The revelation has put an end to speculation over extraterrestrial life form, uncovering the tragic story of a baby girl, called Ata, who either was stillborn, or died immediately after birth.

In 2003 the skeleton was found in Chile’s Atacama region, with researchers initially assuming it was ancient, although further analysis helped to determine that it was only about 40 years old. While the discovery was only six inches tall, scientists observed that its bones had features of a child aged between six to eight years old, with an angular skull and 10 pairs of ribs, which is less than the normal 12. Such remarkable features have only deepened the mystery, prompting people to wonder what its origins were.

In 2013, Garry Nolan, a professor of microbiology and immunology at Stanford University in California, suggested that the remains belonged to a human, although found it difficult to determine the reason for the mutations. Nolan and his colleagues have recently published their research on Ata’s DNA; according to the study, the baby girl had mutations in at least seven genes, which either caused such deformities, or accelerated their development. Besides the mutations, she might have had congenital diaphragmatic hernia, a life-threatening condition, a birth defect, which prevents the diaphragm from developing properly.

Twitter users were quick to respond to the news, with some saying that conspiracy theory advocates would not stop thinking it was an alien regardless of the evidence.

"But those who believe that Ata is extraterrestrial aren’t changing their minds, regardless of the new scientific revelations."
since when did evidence ever stop conspiracy theorists?

How many of you seriously believe that modern humans are the only race of highly intelligent humanoid beings to have evolved on this planet in the past 500 million years?#Evolution #DarwinsTheoryOfEvolution #MissingLinks

ive known about Ata for years. i don’t care what the science says, its obviously an alien, just look at it!

“While this started as a story about aliens, and went international, it’s really a story of a human tragedy. A woman had a malformed baby, it was preserved in a manner and then ‘hocked’ or sold as a strange artifact. It turns out to be human, with a fascinating genetic story from which we might learn something important to help others. May she rest in peace,” Nolan told The Guardian.

The findings were published on March 22 in Genome Research.