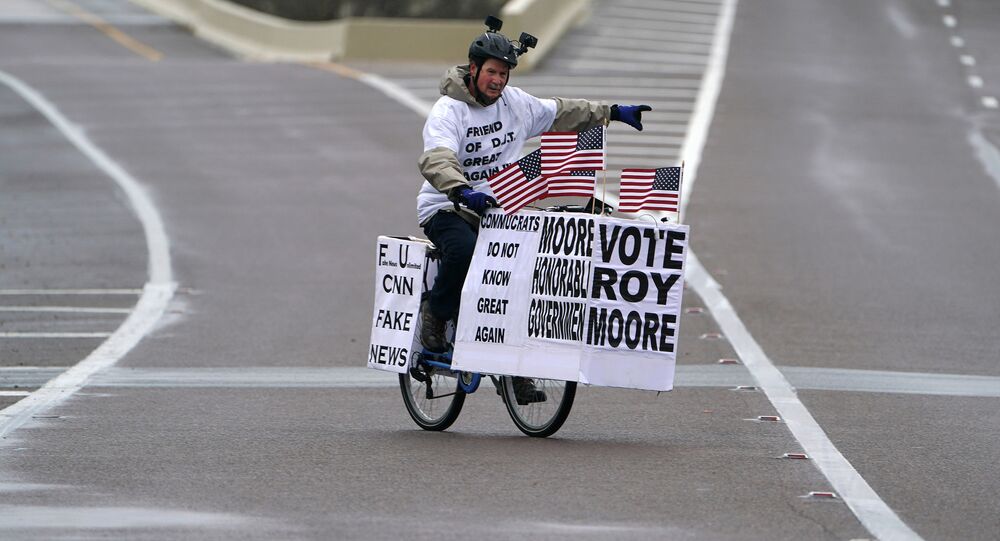 The US president has addressed the Pensacola rally, which took place several miles away from the Alabama border and inside one of Alabama's largest media markets days before the special election to fill Attorney General Jeff Sessions' former seat. Twitter users have been quick to react to the endorsement.

US President Donald Trump has urged Alabama voters to "get out and vote" for GOP Senate candidate Roy Moore, mocking his Democratic Party rival Doug Jones.

Trump has praised the "very enthusiastic" fans at Pensacola rally, which took place several miles away from the Alabama border and inside one of Alabama's largest media markets.

A big contingent of very enthusiastic Roy Moore fans at the rally last night. We can’t have a Pelosi/Schumer Liberal Democrat, Jones, in that important Alabama Senate seat. Need your vote to Make America Great Again! Jones will always vote against what we must do for our Country.

During his "Make America Great Again speech," the president had described the democratic candidate as too liberal for Alabama and warned that Republicans can't afford to lose a vote in the Senate, where they hold a 52-48 majority.

Roy Moore has retweeted Trump's statements, saying he has found his "best supporter" in Trump.

We have the best supporters! https://t.co/mKMEtELe9r

Trump's endorsement of the Senate candidate from Alabama has caused shock waves on Twitter, with many urging Moore to "stay away from children" and calling him a child molester.

But please stay away from the children!

America hopes you lose this election. If you win it, America loses. #PedophileRoyMoore

Its OK folks, he got the mama's permission.😞 pic.twitter.com/XgmnVTdxhf

Trumps approval is sinking every day. He’s down to 32%. Americans are smarter than they thought. Continue to show the world we are great here in Alabama. Vote change. Vote Doug Jones. #alabamasnow

I’m not a Democrat but I left the Republican Party when @realDonaldTrump got the nomination, and I will vote for Democrats until Republicans rediscover morality, ethics and responsible governing.

The Republican hopeful's endorsement has also become the theme for numerous memes spread across the social network.

However, very few have welcomed the candidacy of Moore, who has denied numerous allegations of sexual misconduct, mostly in regard to underage women.

Republican candidate Roy Moore has faced multiple allegations of sexual misconduct, including assault and sexually encounters with underage girls when he was in his early 30s, with many GOP members, including Paul Ryan, calling him to leave the race in the weeks since the accusations first came to light.