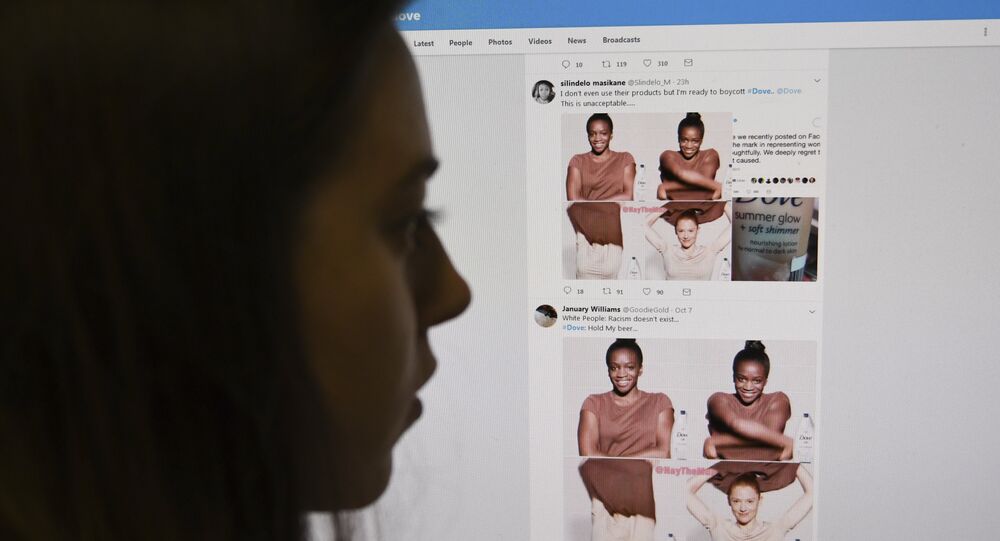 A short commercial by the soap manufacturer Dove has caused controversy among internet commentators who have alleged that it is racist because it shows a black woman turning into a white woman.

The black woman who starred in a controversial Dove ad which prompted thousands of complaints has spoken out on the matter, denying that the commercial is racist.

Amid the furor, the woman who starred in the commercial, Nigerian Lola Ogunyemi, has spoken out about the ad in the Guardian. She says that she didn't think it was racist and was pleased to take part in the campaign, which was first complained about in a Facebook post by make-up artist Naythemua.

Her experience with the Dove team was "positive," Ogunyemi says, adding that she "had an amazing time on set."

"All of the women in the shoot understood the concept and overarching objective – to use our differences to highlight the fact that all skin deserves gentleness," she explained.

Here is the @Dove commercial guys. This is better than those screenshots. pic.twitter.com/1pDgKH6eCc

​When she saw the first Facebook ad, Ogunyemi admits that she "loved it," as did her friends and family.

"Then, the full, 30-second TV commercial was released in the US, and I was over the moon again. There were seven of us in the full version, different races and ages, each of us answering the same question: 'If your skin were a wash label, what would it say?'"

#Dove has been racist for many years pic.twitter.com/3AyGsYPnuf

the racist dove ad is a continuation of a long history of racist soap advertising pic.twitter.com/nO7iDT7dxH

​​​Dove, which is owned by Unilever, and other soap manufacturers have been criticized for racist advertising campaigns in the past. In the 20th century, soap commercials regularly depicted black people as unclean, which many critics have referred to in discussions of the latest Dove campaign.

© REUTERS / Chris Helgren
When Dove Cries: Company Apologizes After 'Racist' Ad Sparks Outrage
In a Guardian article, Ogunyemi says that "she can see how the snapshots that are circulating the web have been misinterpreted, considering the fact that Dove has faced a backlash in the past for the exact same issue."

"There is a lack of trust here, and I feel the public was justified in their initial outrage. Having said that, I can also see that a lot has been left out. The narrative has been written without giving consumers context on which to base an informed opinion."

An image we recently posted on Facebook missed the mark in representing women of color thoughtfully. We deeply regret the offense it caused.

"While I agree with Dove’s response to unequivocally apologize for any offense caused, they could have also defended their creative vision, and their choice to include me, an unequivocally dark-skinned black woman, as a face of their campaign. I am not just some silent victim of a mistaken beauty campaign. I am strong, I am beautiful, and I will not be erased."​

The video begins with a black woman in a brown-colored top, who then takes the top off and turns into a white woman. Screenshots of the first part of the commercial were rapidly shared on social networks, where it caused heated discussion.

This makes me wonder how many other outrage stories are misunderstandings. Or maybe it is as simple as a racist ad. https://t.co/9Lzp65i1Ou

People say this @Dove ad is racist but what's the context? All I see is three girls, who happen to be of different races, magically changing pic.twitter.com/9ePiqlYB5D

​​Some commentators say that the full commercial isn't racist since it shows the white woman subsequently turning into an Asian woman, but others maintained that the ad perpetuates racist imagery.

Future of Advertising: New York Subway to be Packed End to End With Displays