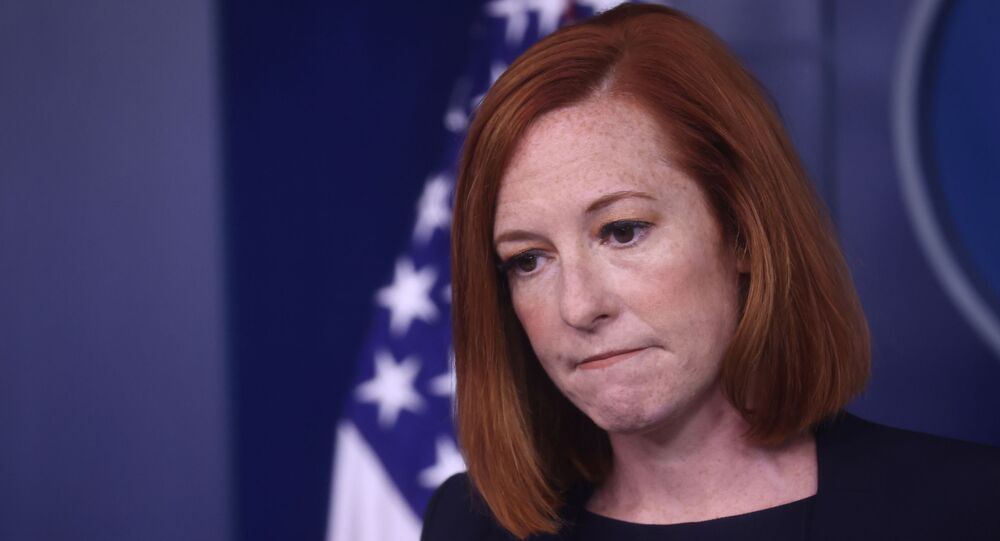 White House Press Secretary Jen Psaki's Thursday news conference touched on a variety of topics, including the position of US President Joe Biden's administration regarding recent protests in Cuba, as well as Washington's ongoing effort to combat "misinformation" and control the narrative when it comes to COVID-19 vaccines.

When questioned about Cuban protesters' grievances, Psaki made no mention of the US' "genocidal" embargo and contended to reporters that the current situation on the island is a direct result of communism's shortcomings.

"Communism is a failed ideology - and we certainly believe that," she said of US President Joe Biden's administration. "It has failed the people of Cuba. They deserve freedom. They deserve a government that supports them - whether that is making sure they have health and medical supplies, access to vaccines, or whether they have economic opportunity and prosperity."

JUST IN - Psaki: "Communism is a failed ideology, and we certainly believe that it has failed the people of Cuba. They deserve freedom."pic.twitter.com/MK0dda9NCe

"Instead, this has been a government - an authoritarian, communist regime - that has repressed its people and has failed the people of Cuba," Psaki added. "Hence, we're seeing them in the streets."

Psaki's condemnation of communism came just a day after she seemingly avoided mentioning the ideology by name.

When asked if Cubans were protesting because they "hate communism," the White House press secretary asserted that Cuban are "opposed to the oppression" and the "mismanagement" of the country's government.

"We certainly support their right to protest. We support their efforts to speak out against their treatment in Cuba," she told reporters on Wednesday.

Psaki's change in rhetoric threw some netizens for a loop, and made many question what kind of brand of "freedom" the US would bring to the island nation it slapped with crippling sanctions.

If the ideology has failed shouldn’t we lift the blockade to provide support to the suffering people? No? Just medieval siege warfare? Cool I can tell your concern is the people of Cuba

White House proofs that Cuban Protesters are US Friendly Enemy for destruction of their country.
Cuba doesn't need interference and warfare. It needs to lift the life sanctions and containment.

During the same news conference on Thursday, the White House press secretary revealed that the administration has teamed up with Facebook, and is now flagging so-called "misinformation" while also tailoring content to align with federal COVID-19 vaccination efforts.

She did not expound on White House criteria for determining what makes a social media post "problematic."

"We're working with doctors and medical professionals to connect to medical experts who are popular with their audiences," she added, noting that said content is "boosted" or promoted for more exposure on Facebook. "So, we're helping get trusted content out there."

Psaki declared that there are an estimated 12 individuals who are responsible for around 65% of all anti-COVID-19 vaccine misinformation on social media.

Psaki's comments quickly elicited responses from thousands of netizens who appeared both confused and surprised by the press secretary's admission.

welp, if you didn't think Facebook was a propaganda arm of the U.S. government before.

I have an objection. It’s called the U. S. Constitution. These people are violating their oaths of office.

News of the White House's direct influence on Facebook content comes alongside the publication of US Surgeon General Dr. Vivek Murthy's public advisory on the "urgent threat of health misinformation." According to a survey conducted by the Kaiser Family Foundation and cited by the Surgeon General, 67% of unvaccinated adult respondents heard at least one myth about the COVID-19 vaccine and either believed it to be fact, or were unsure of its veracity.

The advisory document itself sets forward a number of recommendations for those in the US, including everyday individuals, journalists, educators, researchers and the government.