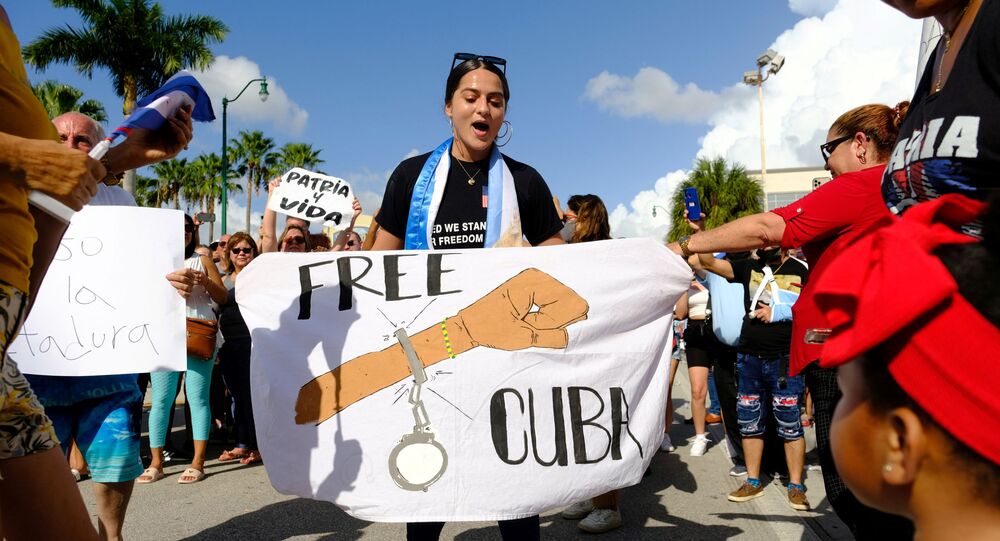 Several thousand people took to the streets of Cuban cities on Sunday in 'spontaneous' protests over economic difficulties facing the island nation. Cuban President Miguel Diaz-Canel immediately called on supporters to stage counterprotests to stop the enemies of the Revolution from destabilising the situation.

"Yesterday's events in Cuba were not a social uprising, but disorder, disturbances caused by a communicational operation that had been prepared for some time and to which millions of dollars had been committed," Rodriguez said in a televised address.

The diplomat slammed President Joe Biden's "cynicism and hypocrisy" in his recent remarks on Cuba, and his decision to "forget" to mention the ongoing US blockade of Cuba as the main cause of the island's difficult economic situation.

The foreign minister also went on Twitter to attack Biden's national security advisor Jake Sullivan over his tweet about US support for "freedom of expression and assembly across Cuba," in which Sullivan warned that the US would "strongly condemn any violence or targeting of peaceful protesters who are exercising their universal rights."

Sullivan, Rodriguez suggested, "has no political or moral authority to speak about Cuba," given that "his government has allocated hundreds of millions of dollars to promote subversion in our country" and its implementation of a "genocidal blockade, which is the main cause of economic scarcities."

The White House National Security Advisor has no political or moral authority to speak about Cuba.
His government has allocated hundreds of millions of dollars to promote subversion in our country & implements a genocidal blockade, which is the main cause of economic scarcities.

Also on Monday, White House spokeswoman Jen Psaki suggested there was "every indication" that the weekend protests in Cuba were "spontaneous" and "inspired by the harsh realities of daily life" on the island nation, not by another country.

© REUTERS / MARIA ALEJANDRA CARDONA
Miami Mayor Calls to Send Troops to 'Protect' Cubans From a 'Bloodbath’ as Protests Sweep The Island
US policy toward Cuba is "governed by two principles," according to Psaki: "First support for democracy and human rights, which is going to continue to be at the core of our efforts through empowering the Cuban people to determine their own future. Second, Americans, especially Cuban Americans, are the best ambassadors for freedom and prosperity in Cuba."

EU Foreign Policy Chief Josep Borrell, meanwhile, called on Havana to "allow peaceful demonstrations and to listen to the discontent being expressed by the demonstrators."

Several thousand people took to the streets across several Cuban cities on 11 July, with the protests reported to be triggered by food and medicine shortages. The protests were said to have begun as "spontaneous demonstrations" in a municipality outside Havana and in Palma Soriano, a city in the country's southeastern province of Santiago de Cuba.

© AP Photo / Ariel Ley Royero
Cuban Leader Calls on Supporters to Hit Streets, Oppose Provocations - Videos
Demonstrations spread to an unknown number of cities before Cuban President Miguel Diaz-Canel called on supporters of the country's ruling communist system to take to the streets to stop the island's destabilisation. "We will not let anti-revolutionary mercenaries who are beholden to the American Empire to create instability. There will be a revolutionary response," he said in a televised address, calling on communists to oppose any staged provocations.

Cuba has been embargoed by its northern US neighbour since the late 1950s revolution against US-backed dictator Fulgencio Batista by Fidel Castro and his band of leftist revolutionaries. Castro first sought to mend ties with Washington, but America's hostile response to his overtures, economic and political pressure, and eventually plots by the CIA to have him murdered pushed him into the arms of the Soviet Union, which would spend several decades supporting Cuba militarily and allowing it to integrate into the Moscow-led Comecon economic alliance.

The Soviet collapse in 1991 left Cuba in a dire economic state, with Washington analysts smugly predicting the implosion of its communist government. This never happened, and Havana rode out the 90s 'special period' before striking new partnerships with Venezuela, China and Russia after the 2000s. The Obama administration took small steps to normalise ties, but the Trump administration reversed many of these efforts before branding Cuba as a part of a "troika of tyranny" alongside Venezuela and Nicaragua. Joe Biden has promised to continue the Obama-era approach, but has yet to do so. In the wake of Sunday's protests, the US president slammed Cuba's "authoritarian regime" and said the US stands "with the Cuban people and their clarion call for freedom."

© AP Photo / Ismael Francisco
Shameless US Hypocrisy on Cuba
Despite the progress made since 1991, Cuba's economy has yet to reach its pre-Soviet collapse highs, and this has caused dissatisfaction among some quarters of the population, with opponents of the current government arguing that a restoration of capitalism and good relations with Washington might improve the situation. Supporters of the ruling communist authorities dismiss such arguments, however, suggesting that Cuba's return to its pre-1959 state would result in the country becoming a colony of the US run by wealthy emigres holed up in Miami.
...
Reddit
Google+
Blogger
Pinterest
StumbleUpon
Telegram
WhatsApp
933
Community standardsDiscussion