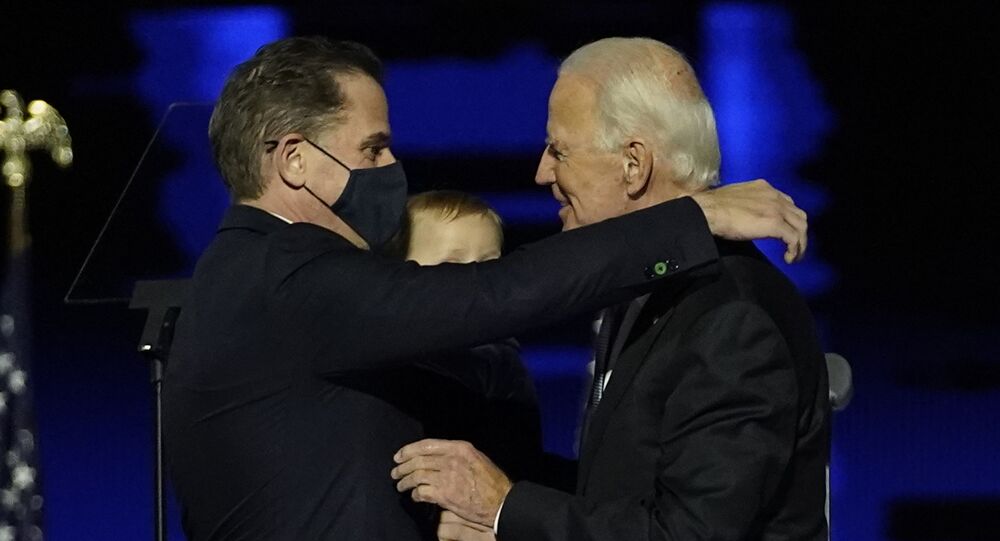 The actions of Hunter Biden have repeatedly created problems for his father Joe Biden, who first served as vice president in Obama's administration and became president himself in 2021. They have repeatedly denied all allegations of conflict of interest, despite numerous reports strongly suggesting otherwise.

Hunter Biden's auction for his own artwork has attracted ethics scrutiny following the publication of a report in The Washington Times claiming that the White House drafted an agreement that will keep all bidders and buyers anonymous, hiding their identities both from the public and Biden himself.

The arrangement, apparently struck with the gallery owner, Georges Bergès, who will be responsible for keeping the anonymity of the buyers, was reportedly done in an attempt to prevent purchases made with the aim of gaining access to Hunter's father, US President Joe Biden.

The White House itself praised the idea in a comment for the newspaper as a "prime example […] of the highest ethical standards", presumably set by the Biden administration.

However, not everyone agreed with this characterization of the White House's agreement. Former director of the Office of Government Ethics (OGE), Walter Shaub, has criticized the measure, saying that no OGE would ever allow such self-blinding agreements. He also dismissed suggestions that the agreement cooked up by the White House is akin to blind trusts – a legal method for officials to avoid conflicts of interest in the US.

Shaub further stressed that essentially the White House is asking the public to trust it blindly that the names of the buyers won't be leaked to Hunter Biden or anyone else to prevent the public from monitoring the buyers for engaging in lobbying activities.

This isn't a blind trust, it's the White House asking for us to trust blindly. And who are we trusting? A dealer in an industry that is notorious for money laundering and future art buyers who could be foreign governments or unsavory individuals. /6

This is nothing like a blind trust. Blind trusts are highly regulated and come with severe financial penalties for leaking information. By regulation, the trustee must be a financial institution and not an individual, and it must be a bank or registered financial advisor. /1

The former OGE head said he would strongly advise the president to convince his son to drop the idea of the artworks auction for good to avoid controversy.

This is not the first time Hunter Biden's actions have raised questions about possible conflicts of interest between him and his father. The first time this issue emerged was when Hunter Biden landed on the executive board of the Ukrainian gas company Burisma right after the elected government in Kiev was toppled by the opposition backed by Western countries, all while his father served as the US vice president.

The new scandal emerged after an email from a laptop, which presumably belonged to Hunter, suggested that he had organized a meeting between his colleague from Burisma and his father when the latter still held the high government post. The Bidens have repeatedly rejected all allegations of conflict of interest, with Joe Biden claiming he had never discussed any business affairs with his son Hunter.