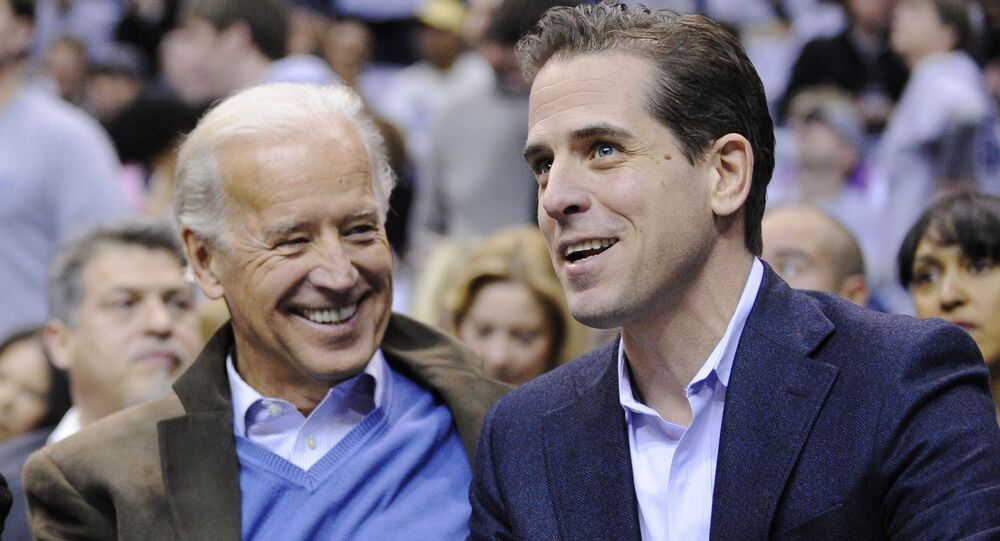 His father, US President Joe Biden insisted that he had never profited from Hunter's business affairs abroad. He also expressed confidence that his son did not violate any laws, as Hunter faced an FBI probe.

A new trove of documents from Hunter Biden's "laptop from hell", published by the Daily Mail, suggests that US President Joe Biden relied heavily on financial assistance from his son during his term as vice president and afterwards. As such, Hunter paid $190-a-month AT&T phone bills in 2010 for the then-vice president and over $5,750 for repairs at Biden's house in Wilmington, Delaware, the emails between Hunter and his business partner at the investment company Rosemont Seneca Partners reportedly showed.

According to the media report citing text exchanges between Hunter and his daughter Naomi obtained from the laptop files, the son continued to sponsor his father, Joe Biden, after he left the White House, earning up to $11.1 million per year from giving speeches and writing books.

Hunter, who has been making around $1,000,000 per year from his controversial post on the board of a Ukrainian gas firmed probed for corruption, Burisma Holdings, and an unknown amount of income from reported side dealings with Chinese partners, claimed to have been spending "half" of his earnings on Joe Biden (and possibly some other members of the family).

"I hope you all can do what I did and pay for everything for this entire family for 30 years. It is really hard. But don't worry, unlike Pop [Joe Biden], I won't make you give me half your salary", Hunter texted his daughter in 2019, threatening to "never give [her] another dime again" and urging her to "figure out how to support" herself.

Aside from that, Joe Biden actively used "most of" Hunter's lines of credit, judging by the emails and texts released by the Daily Mail. In 2018, Hunter complained to his assistant that he had been "shut out of his own bank account" due to having "too many cooks in the kitchen, too many profile changes and such".

The documents the Daily Mail claims to have found come from several broken laptops purportedly dropped off by Hunter Biden or his representative at a repair shop in Delaware. The recovered data from the laptops and the devices themselves were never picked up and the shop's owner eventually handed over the data to the FBI and Trump's personal lawyer, Rudy Giuliani, who, in turn, distributed them to media outlets.

Some of the documents published ahead of the 2020 presidential election suggested that Hunter Biden organised a meeting between his father and one of his colleagues from the Burisma board, when Joe Biden was still vice president. The findings contradict Biden's own earlier claims that he had never mixed his government service with his son's foreign business affairs and that he had never profited from them.