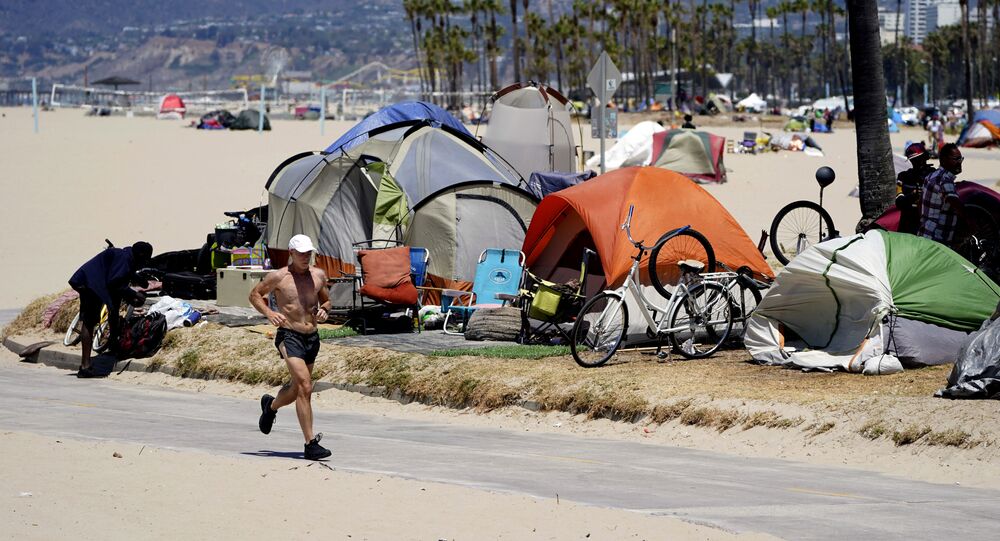 Los Angeles Mayor Eric Garcetti said this week that he was not going to get into a “p***ing match” with Sheriff Alex Villanueva, who accused the county’s authorities of failing to deal with the homelessness crisis in the Venice Beach area.

A viral clip showing a bizarre attack on a homeless man is bringing renewed attention to the problem of rising violence in the Venice Beach neighbourhood of Los Angeles, which was swamped with tent encampments in recent months.

The video posted online shows a man being beaten by an identified woman as another watches over, with passersby visibly ignoring the brawl.

It’s not clear from the clip what the reason was for the scuffle, or whether all of the participants were homeless.

Another recent video posted on YouTube showed a man being taken into custody by police while tied to a stretcher. The description says he was tased by a Los Angeles Police Department officer after assaulting a fisherman at Venice Beach. The offender was described as “mentally ill”.

Violence is on the rise in the Venice Beach area, which is home to numerous homeless encampments.

will #Homeless be bullied out of #Homes & forced to take tents down by July 4 like #Sheriff Villanueva said & Jeffrey Katzenberg wants?#we have abandoned our most vulnerable #Human #family members!#LA #losangeles #homeless #USA @aoc pic.twitter.com/99ZMtqhaQD

Reports of shootings, harassment and assaults have flooded authorities in recent months as Lost Angeles Sheriff Alex Villanueva called the county supervisors, including L.A. Mayor Eric Garcetti, “architects of failure” for interfering with LAPD’s efforts to clear out homeless encampments from Venice Beach.

“This is a crisis. We need to take it seriously,” Sheriff Villanueva said last month.

He urged authorities to declare a local state of emergency over “existential threats to the lives” of LA residents. Villanueva slammed them for being indifferent to the crisis because it was “not part of their woke rationale”.

Garcetti responded by saying he was not going “to get into a p***ing match with the sheriff.”

According to the latest figures cited by the Fox News, Venice Beach area has experienced a 132% rise in assaults with a homeless person identified as suspect by the end of May, while robberies involving a homeless person increased by 160%.