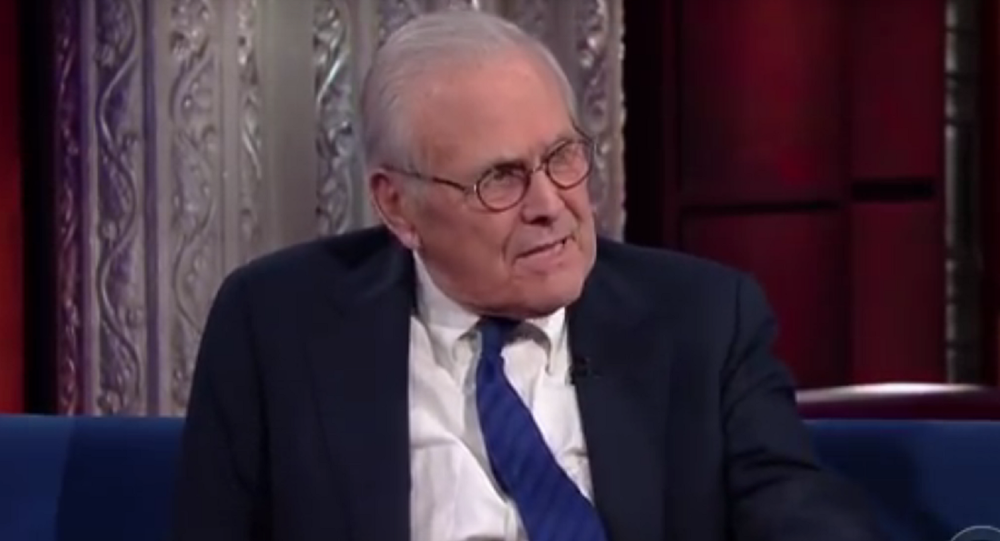 “[Rumsfeld] did not fix the Pentagon’s programmatic pathologies and made some worse,” former Defence Department analyst Chuck Spinney said. “He magnified the perverse effects of concurrency with his policy of spiral development, which is being carried out today in the rapid prototyping concept.”

Spinney said Rumsfeld put weapons into production before they were fully designed and successfully tested in an operational environment, then claimed the US could "fix" them once deployed.

Former FBI special agent Coleen Rowley, a leading Bureau analyst on the Iraq War, believes Rumsfeld should be remembered for the rationales he fabricated as a basis to invade other countries.

“While the media obituaries are taking Rumsfeld to task for ‘mistakes’ he made in prosecuting the wars on Iraq and Afghanistan, he seems to get a pass for having concocted all the lame and false justifications used to launch the illegal wars in the first place,” she said.

Former senior CIA analyst Ray McGovern recalled how Rumsfeld liked to say "some people lie and think they can get away with it."

"And he Rumsfeld personified personal proof of this dictum of his," McGovern told Sputnik. "He was never confronted about his lies."

During his tenure as US defence secretary, Rumsfeld had come under fire for the alleged mistreatment of prisoners at Guantanamo Bay and enhanced interrogation techniques that many rights groups believe amounted to torture. He was also known for witty - yet controversial - quotes including the now famous (or infamous) "there are known unknowns" about intelligence matters.

Rumsfeld served as US Defense Secretary twice, under President Gerald Ford in the 1970s and in the George W. Bush administration from 2001-2006. He also served in the US Navy from 1954 to 1957 as a pilot and a flight instructor, then continued his service as a reservist until 1975, according to the Pentagon. In a statement on Wednesday, current Pentagon chief Lloyd Austin said he was saddened to hear about Rumsfeld's death, hailing him for his "probing intellect," and abiding commitment to the United States.

Rumsfeld, widely considered the architect of the US invasions of Afghanistan in 2001 and of Iraq in 2003, died at the age of 88 in Taos, New Mexico on Wednesday. Rumsfeld as President George W. Bush's defense chief, had openly vowed to modernize the US military and transform the weapons development process.